Mark Twain has many quotable quotes. The one I want to use here is: “It usually takes me more than three weeks to prepare a good impromptu speech.”

Most of the time when we talk we just get on with it with varying degrees of fluency. But if it’s a presentation or a briefing then many head for PowerPoint. Some of us dread talking impromptu as we forget some detail or dry up.

We admire those who can speak impromptu without a note, PowerPoint slide or any other prop in sight. So can we do better?

I will identify two situations here. First, where you have time to prepare. Second, where you need to talk impromptu with little or no notice.

When there’s time to prepare

Prepare – Step One
Brainstorm ideas on paper. This could be scribbling down ideas without thought to their order or relative importance or structure. Then as a second stage herd the ideas into order, or use the Mindmap idea. One good system is at thinkbuzan.com/uk, where ideas radiate like spokes of a wheel.

Prepare – Step Two
You have some key headings so now you enlarge or expand on them.

Prepare – Step Three
Start strong – use a key fact, anecdote, or something to arouse the curiosity of the audience. Add a few key points that are relevant to the audience backed up by examples.

Prepare – Step Four
End: A summary, a point of inspiration, action or encouragement. But being impromptu also means you have to remember what to say. Here are five ideas:

When there’s no time to prepare

This is of course much harder!

Experienced speakers have a variety of ways to say something coherent. Much of it based on previous situations. So for example a sudden request to give a vote of thanks to a departing executive may follow a well-practiced format. It could be:

All of this assumes that you know the person reasonably well.

Let’s say you are asked to talk about Scottish independence from a UK viewpoint:

Position: Alex Salmond, a canny politician, has persuaded the British government to hold a referendum which will decide if the Scots should leave the UK.

Problem: Many – e.g. the UK without Scotland will become significantly smaller and weaker. Might lose its seats on the UN Permanent Council. Scotland might well find that going it alone is high risk. Etc.

Possibilities/Options/Choices: The UK plays it cool to avoid stirring up resentment. The UK communicates with clarity the disadvantages to Scottish voters why they are better off. The UK gives further local powers to Scotland.

Proposal: The UK should engage a wide band of activities to preserve the state of the Union but without being seen to bully the Scottish.

Another template for improvisation follows this 4-way box: 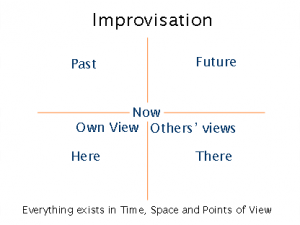 Leveson to the test

Here’s a worked example, Lord Leveson’s Enquiry into the Press:

Now Leveson enquiry has been published – recommending that the Press need independent regulation enshrined in law.

Here Here the UK the press have enormous freedom…

There But by contrast in France… and as for Russia press freedom looks quite different.

Future PM and Press do not want legal process to apply, but most of us do want binding laws. So the challenge is to have a system where freedom of the press is absolute yet the press behave well. Some sort of compromise is likely.

Then there is Rudyard Kipling’s little Poem:

You could quickly construct a talk based on the six open questions:
What …is happening
Why …is it necessary
How…will it be dealt with
Who….is affected
Where… is it taking place
When….will it happen

The ability to talk ‘off the cuff’ is a skill that can be developed both through experience and practice.

You could do worse than listen to Just A Minute (BBC Radio 4) to see how they manage, at no notice, to cobble together a string of ideas with no hesitation, deviation or repetition.

In the real world, you are allowed some repetition and certainly should pause!