The British Events industry was worth £39.1 billion in 2013 and £19.9 billion of that came from conferences and meetings. (Source: Business Visits and Events Partnership.)

There has been healthy growth in the conference sector over the past two years and it’s showing no signs of slowing down. As Nigel Cooper, Managing Director at P&MM, a UK marketing agency, says:

“In an age when connectivity between a brand and its consumer or a business and its staff is key, face-to-face events are a vital tool.”

That’s very intriguing, amidst what is frankly a bewildering array of new technology.

In her article for Raconteur, ‘Create an experience not an event’, Clare Gascoigne writes:

“It’s time to step away from the PowerPoint presentation and make business events a memorable experience to capture the attention – and imagination – of customers.”

It’s waiting for you…. 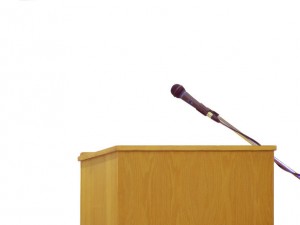 I agree with Clare. Unfortunately, too many people stepping up to the podium don’t step far enough away from their PowerPoint presentations.

Instead of using slides sparingly to support the compelling delivery of an engaging presentation, the vast majority of presenters use them as if they’re a script, reading every packed line in a bland monotone voice.

Tim Leighton is a Senior Vice President and Creative Strategy Director at one of GPB’s clients, Jack Morton Worldwide, an events agency. Quite rightly Tim talks about using visuals in a way that best support your aims:

But Public Speaking is no longer just for the Chief Executive or other ‘C’ suite members.

For a variety of reasons, there is a multitude of face-to-face events, that involve new technology, taking place in the UK and around the world. Combine the need to be good with some of that very clever innovative technology, and what emerges is a new breed of Public Speaker. This will require the average untrained, unrehearsed speaker to considerably raise their game.

Unfortunately, so many presentations are the antithesis of engaging. This often seems to be the case in the tech space, at least from my experience. It’s all very well watching hours of TED and TEDx talks online, but if we don’t learn any of the good habits of the best of those presenters and apply them to our talks, it’s unlikely that audiences will be captivated by what we have to say, let alone retain the key messages we are asking them to act on.

I had the pleasure of working with a design industry client on a key presentation for his company a few months ago. It was for ‘Packaging Innovations 2015’, one of their most important annual industry conferences.

We put a lot of work in together over the course of several sessions over several weeks, working initially on content then on delivery. He is the Founder and has been Managing Director of Finish Creative Services for over 25 years, so you can imagine how often he has delivered pitches and presentations. Yet he maintains that this was the best presentation he had ever given – and he got fantastic feedback from clients, colleagues and peers.

A key part of this was because there was such a strong narrative that ran throughout. He also made it a personal story – about innovation in packaging, of all seemingly mundane things.

He started with a story about early Tetra Paks, going on to ring pulls, and went from his childhood in the 60s through to present today. He used a combination of archive black and white footage and recent video to show off the amazing technology and skill employed in the studio. He accompanied this with succinct text (just a few bullet points!) on his PowerPoint slides – all supporting his story of the often subtle evolution of packaging over 50 years.

We rehearsed his delivery several times during our coaching sessions including in front of the directors, then the staff.

Rehearsing is another area where many presenters think they can skimp. I have definitely been guilty of this at times – and no matter who you are, it shows.

It’s clear to me that Public Speaking has become far too competitive to get on a podium without being really well-prepared; and that includes doing a substantial amount of research into your audience and giving a lot of thought to your narrative.

Further, for those of you who are now regular readers of our “SpeakUp!” Journal , you’ll have seen us write about Aristotle’s Three Appeals, The Two Routes to Persuasion and probably VAK (Visual, Auditory and Kinaesthetic) learning styles too.

People process and absorb information in different ways, and a good presenter will also consider this when designing their presentation.

Nancy Duarte, the presentation and communications specialist who created the graphics that formed the basis of Al Gore’s award-winning film ‘An Inconvenient Truth’, asserts that it takes 90 hours to craft a world-class 60 minute, 30 slide presentation, with a third of that time allocated to rehearsing. That puts preparation into perspective, even if many of us won’t be developing hour-long presentations.

Most of us won’t put in anywhere near 30 hours of rehearsal time either, but even a third or a quarter of that would transform most presentations. So I’d like to finish this article with a quote from Chris Anderson’s new book, “TED talks” (p148):

“Most of the big TED hits happened only because of the hours of prep the speaker put in.” 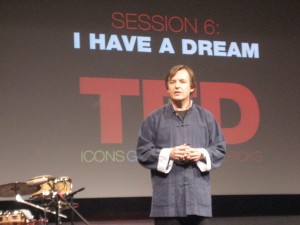 (Ed: Chris Anderson, seen left in 2007, owner and head of TED since 2000, visited London last week. It is clear from his talks that in order to give a great TED talk, rehearsal has to go beyond the point where it looks learned to the point where it no longer does. He commented that sometimes this can take a very long time, and some people never get there!)