The way we use words is a key part of presenting and persuading successfully. Great speakers and their speechwriters understand the power of words.

My first point is that the spoken words we use in every day dialogue are essentially informal. When we commit words to paper, the style and type of words we use changes, as the words usually become much more formal.

Sometimes presenters write – or type out their words  – to be delivered verbally, and often the words are on PowerPoint slides. As a result the engaging conversational style vanishes.

Spoken English is characterised in a number of ways:

Let’s take a look at each:

First, here is a table of polysyllabic* phrases and their simpler equivalents:

The English language has many words covering a continuum from the most formal to the most informal – the latest Oxford English Dictionary lists some 278,000 main entries.  The 75 most commonly used words of the English language are all Anglo-Saxon. The 76th is the French-derived word ‘Number’.

Melvin Bragg, in “The adventure of English” says that Anglo-Saxon language came across the channel in the fifth century with the German warrior tribes who came as mercenaries to prop up the departing Romans. At that time the locals spoke in Celtic with leftover Latin, but Anglo-Saxon morphed into Old English and prevailed in the main area of Britain. The Vikings also added to the pile – look at this modern day comparison:

Scottish: The little bairn will go to the kirk in the morning.

1066 changed all that. French became the language of the rich, with an overlay of Latin. The peasants stuck with Anglo-Saxon but then a curious thing happened. The languages mingled and in 1399 King Richard’s speech of abdication was delivered in English which we could recognise today; French dwindled as the primary tongue. The relevance here is that the Anglo-Saxon root is more commonly used in spoken language. The words are generally shorter and stronger. The Latin equivalent is more likely to be polysyllabic and can sound ponderous, pompous or even pretentious.

In one of Alistair Cooke’s radio broadcasts, “Letter from America”,  he said that Americans are more likely to adopt a Latinate style than the British. He   gave us two statements which are saying much the same thing:

“The Directive was mandated and subsequently failed to be executed.”

“The order was given but not much was done about it.“

And we sometimes laugh at the formality of ponderous statements by the police:

“The intoxicated person exited the building and was last seen proceeding down the street in a westerly direction. When apprehended he kicked out in a kicking motion and police dog Douglas attached himself to the lower end of his trousers” (40 words, 16 polysyllabic).

Or they could say: “The drunk came out and ran off towards the west. My dog Douglas caught him and held on to his trousers in spite of being kicked” (26 words, only 4 polysyllabic).

We are constantly advising our clients to avoid abstraction. The speaker knows the subject area well. They will claim that their audience also know the subject area  well and do not want to be patronised. But it is highly probable that the audience don’t know the subject to the same level of detail or complexity, so will struggle to keep up, especially if there is a dense deluge of PowerPoint slides.

Verbal imagery helps to anchor the audience by letting them contextualise, frame or visualise the main theme; they can then take on an extra load of detail that may also be complex. Imagery also helps them to remember the key points long after the event. And here it is time to introduce the concept the ladder of abstraction. This idea comes from Professor Hayakawa. He suggests there are several layers of abstraction.

Here is a real life example from Airbus:

“Our challenge is to make our new aircraft as light as possible yet safe. Imagine you have a coke can in your hand. You can easily squeeze it in your hand. The skin of our aircraft in only 5 times as thick.

Now imagine you are driving your Volkswagen Golf and make a terrible mistake causing the car to plunge over a precipice into the valley below. The car is destroyed and you are dead.

No car manufacturer would design a mass production car able to withstand that level of shock. It’s the same for us as we cannot design our new aircraft to land at 300 Knots. There are just too many design constraints. Lets now look at some details, starting with the landing gear….”

The paragraph above needs no PowerPoint picture of a coke can or Volkswagen Golf as the audience will generate those images in their minds. Words well used are more powerful than an actual picture, the listener will remember the analogy and so should also remember much of the more complex detail that might follow. 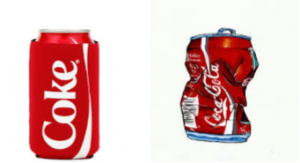 You don’t need to see these…

This is a simple point. In conversation we do not construct sentences the same way that we would with the written word: We often talk in short phrases or ‘chunks’; sometimes verbs are left out, but it doesn’t matter as long as our ideas are clear. Some sections of Tony Blair’s speeches were a succession of adjectives and nouns: New Labour …..New Britain…the middle way, etc! Whatever you think of him, he was easy to understand.

John F Kennedy was one of many who said that Winston Churchill sent the English language into battle. Churchill knew how to use words. He apparently had a ratio of 4 Anglo-Saxon words for every Latin based one. I doubt that he calculated it, but he knew what he was doing. What he knew and we know is that outstanding presenters realise the power of well-chosen Anglo-Saxon words and visual imagery, and use them to produce highly effective spoken communications.

Download a pdf of the article here: Language Styles – the way we speak