The Fourth Estate is well described as ‘that part of society that influences the whole of society but is not part of the political system.’

The significance of the Fourth Estate is rising and so, as a business person, your ‘deal’ with its members matters.

Most people ascribe the term to the mainstream media or the ‘Press’. That is now too narrow, as the estate now encompasses social media, and more widely still (as I will come back to later) the whole of society. When coaching clients for media interviews, we describe the relationship with the Fourth Estate as the “Media Contract”, to help clients to realise that it is simply a business deal, not some newfound friendship or PR team, nor because they are (currently) relevant or important.

Simply put, the “deal” is that you provide the content that the media needs to fill their empty minutes/pages/posts, and they provide you with rapid and almost free exposure to the markets you would otherwise have to pay a fortune to reach, but in a less effective way. It should be a deal that works well for both sides, but naïve, unskilled or low EI* interviewees are all too easily taken for a ride with the result that what is published works for the media but is a disaster for the individual and entity they represent. I need go further than to type ‘Elon Musk’. Journalists excel at getting stories out of people; they would otherwise quickly be out of a job. They are great at building rapport, asking probing questions and using their noses to sniff out something that could get broadcast and/or published. As most are self-employed, this is how they get paid.

But… a great story will always beat a great relationship. Thankfully most “push” stories (like yours or ours) are just bread and butter work to them. Sadly, critical stories are the more popular, although sometimes they will back something worthy or ethical. Most journalists need to be efficient and work quickly to deadlines, so you are either today’s content, or they will move on.

The principles and advice behind GPB’s Media Contract have not changed much since the advent of Social Media, as thankfully they carry over. But one new aspect of social media is the wild fire that can spread so quickly and widely now that everyone is connected to everyone, with opinions coming from the public about the stories they see, views becoming more extreme and the truth getting forgotten. Welcome to the post-truth era, where everyone is a member of the Fourth estate, however little they know or check their facts.

Public opinion now prevails: I read recently1 that Rebecca Aston, the Head of Professional Standards of my professional body, the CISI, has challenged what she calls “the two pillars of goodness” in financial services.

These two pillars (behaviours) are well established: (a) legal (only doing what’s allowed) and (b) ethical (doing what is right for society – e.g. public good and environmental impact). She adds a third, “what society deems right to do”, which I would label here Populism.. Disturbingly I think she’s right. 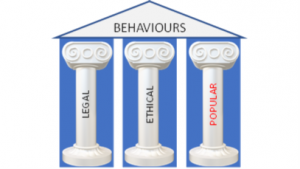 The three pillars of Financial Services?

It’s disturbing because it is based on decisions made by anonymous people who don’t know the full (or any of the) story, who thoughtlessly tweet, text and message on a whim and often whilst doing something else, like walking or driving (Grrrh). It takes us back to the days of the Colosseum in Rome, where the crowd’s chants helped to determine outcomes using thumbs up (they die) or down (lower your swords); moments later they’ve moved on, gratification was instantly satisfied.

One modern example is the public outcry at TSB’s IT crash; another, from TV, is the audience in ‘The X Factor’. Ms Aston uses the example of the treatment of the Australian cricket ball tamperers, to which I will add the knee-jerk reaction to Carlos Ramos’s US Open umpiring of Serena Williams, WADA/Russia, and four-time Tour de France winner Chris Froome, who was cleared just in time to race (and win) this year but was very poorly treated by the race spectators, and Social Media, and is still something of a public pariah. Such overreactions can only later get corrected, often only partially. This adds complexity. How do we think clients should behave and deal with that?

Well you can’t withdraw, because as ever you need to put your side of the story. You don’t (often) get interviewed in social media and you can’t just stay in the traditional media space either, because so many people (especially the younger ones) don’t even engage with it; they get their news from their smartphones, from murky and diverse sources ‘off the grid’. Distorting the truth has never been easier (see Trump/Russian election hackers). 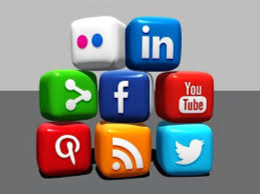 Just some of the Social Media…

To win at Populism you must be popular. This is built methodically so that you create a large and resilient network of supporters to ‘speak’ (I really mean type texts or messages) on your behalf when the time comes for a social media attack. We are all now opinion formers, so it has become a battle of huge numbers. Those who wish to complain now take to social media, not the complaints department.

So you have to have your supporters out there too, ready to act.

Building trust takes years, destroying it can take seconds.  You may have a reputation as a great employer, but that goes quickly if there’s an accusation of abuse/racism/sexism/inequality, unless the masses can speak in your defense. So look after mother ship.

Spikes in activity will still occur where the traditional media, having sniffed a story that may have come from social media, hold interviews with you, leaving you to go last and address the over-reactions. This format may soon become the norm.  So, there is a place for the traditional media interview, but it’s now only part of what’s needed.

Download a pdf of the article here: Your Media Contract with the Fourth Estate