The human voice holds enormous power and potential, but is often underdeveloped in spite of some easy and quick wins.

It is a resilient and flexible instrument that you have more control over than you probably realise. Your voice is also an important part of your identity.  Unique to you, it remains so even when you change pitch, tone, volume, speed and rhythm. The words you use in combination with all or some of these characteristics can have a profound effect on your listeners.

Your voice can soothe, move, reprimand, deride, arouse…even send someone to sleep!  It is sad that many of us cringe when we first hear ourselves on a recording.  Over time we get used to and hopefully learn to accept our voice.  Or we work to make small enhancements, so that we may even learn to love it. 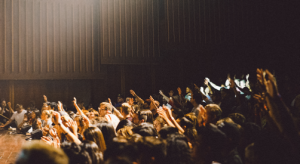 Audiences do engage with speakers sometimes

Patsy Rodenburg OBE is an illustrious voice coach and author who has worked with many actors, politicians and business people over the years. In her book  ‘The Second Circle’, she claims we are at our most persuasive in this ‘second circle’ when speaking in front of an audience.  This state is neither too introverted (past-based) where you are barely heard, nor too extraverted (forward-thrusting), which can come across as invasive.  She writes that second circle is “the give and take of being present”. By working on your breath, posture, voice, language, listening skills, focus, courage and trust, she claims that you can access this ‘second circle’ on a daily basis.

Although your choice of words may be perfectly balanced and your state optimal, if you are not maximising these aspects of your voice and other characteristics, you are letting yourself down, and your words and ultimate objective may simply be lost.

Accents are often a characteristic people say they dislike about their voice, yet they are so much a part of our diversity and they enrich our culture.

My view (and GPB’s) is that only when an accent is so strong that as listeners we would not be able to understand the speaker, does it need to be toned down.

The Scots are masters at moderating their accents. How often have you listened to friends or colleagues from Glasgow or Aberdeen talking to each other and not understood a word of what they said?

By contrast, when they are speaking to you or me, many of them will make adjustments.  A Spanish friend of mine in Havana does the same.  As a university Professor for several years, he knew he had to moderate his accent to be understood by his students. But that need not mean eradicating your vocal individuality.  It’s more about diction; adjusting your enunciation so that you are understood by more people.

In my previous article, I discussed the average pitch height, pitch modulation and nasal resonance of two female US podcasters. Nasality was strongly present in one of them. While some nasality in a speaker is natural, high levels of nasality can be abrasive.

Roger Love, who has worked with the singing voices of many actors, including Jeff Bridges and Bradley Cooper, also works with the speaking voice.  I like the simplicity of Roger’s explanation during an interview with  publisher Paul Feldman, of the National Association of Sales Professionals (NASP).

Roger explained how to minimise nasality when breathing out to produce speech:

“it’s almost impossible to speak nasally when you bring your stomach in because it pushes more air out and then more sound comes out of your mouth instead of trying to get out of your nose.”

Try holding your nose closed when speaking, to judge how much nasal resonance you use. Without getting too technical, his explanation is the simplest way to hear and adjust your nasality. 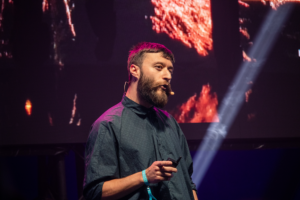 Another area to be mindful of is pace.  Some of us speak too slowly. Others speak too fast, which reduces articulatory movements, especially of the tongue, and results in the short forms of various vowels, for example ‘uh’ and ‘ih’. This in turn reduces comprehension.  Again, think about your audience members.  Presuming your presentation is in English, are most of them fluent in English?

If so, you have the luxury of speaking at a slightly faster pace.  If not, you might want to articulate more carefully, which means slowing it down. You can also help this by using simpler words and pausing for longer between phrases.

Pausing at the end of an important point also allows your listeners to process the information.  A longer pause also creates even more emphasis; this is useful for dramatic effect.

US Presidents Obama and Trump have both used this device often, pausing for several seconds, usually after they have made a key point. Trump’s syntax is similar to that of a preacher; using short sentences combined with vivid rhetoric (some might say ‘rhetorical tricks’).

Most of us love to hear a well-modulated voice and I firmly believe this is not a difficult element to improve.  We don’t need a huge Pitch Range to incorporate modulation, about 1 to 1.5 octaves should do it. In that way we avoid sounding monotonous to our listeners.  Practising with children’s stories, poetry and dramatic texts are enjoyable ways to improve your pitch modulation.  Too often, only volume is used for emphasis when what we really want is a combination of pitch, rhythm, pausing and volume to keep our audience most engaged.

As with the contrast of theatre and screen acting, an adjustment has to be made when speaking on a podcast compared to public speaking. For example, certain consonants (particularly the plosives – p,t,k and b,d,g) become very harsh with amplification. And one needs far less projection in such an intimate setting.

Lastly, disfluencies.  Whether you are a host or guest on a podcast, your interview is usually recorded, so disfluency errors can easily be edited out. But if you are speaking in a live setting, be conscious of your ‘pet’ disfluencies.  It’s much better to use a pause and keep that ‘umm/err’, ‘so’ or ‘obviously’ silent, than to voice it, commonly at the beginning of sentences.

We have created an exercise to help with this, and many of our clients have learned about it through our 1-1 sessions or group workshops. It’s our version of the BBC Radio 4 programme “Just a minute”. If you’ve got a  minute, we can tell you all about it.

Download a pdf of the article here: The Persuasive Voice