It’s easy to be confused about which is which, but it is important to be able to tell them apart.

Paul Ekman is one of GPB’s few gurus. Guru is very old English(!), it’s a Sanskrit word and conventionally it means various things such as ‘teacher’, ‘expert’ or ‘master’. In some cultures it means much more, suggesting a moral compass, or a values leader.  We are pretty cautious about many of the many in our field. Those for instance who are business people rather than academics, and whose work has not been peer group reviewed, published in a learned journal, or whose experimental results have not been repeated with the same outcomes.

Ekman though was a Psychology professor at UCSF1 for over 30 years and is also an author. So to us he is a guru. It was his work on the Facial Action Coding System (FACS), a worldwide system that controversially is innate (not learned) and which underpins our Visual Analysis of facial expression. But he is also well known for the Fox TV series ‘Lie to Me’ where he was the sage behind the camera, and for his work on Microexpressions. All this has led him into a lengthy analysis of emotions.

He was able to show with FACS that we can all read a face and from that reliably tell a person’s emotional state. This is what we use in our Visual Analysis, as what your face says about your emotional state is such an important aspect of communication. It is clear from the huge body of research done that the ‘display’ of emotions – via the verbal, vocal and visual channels – is key to acts of effective persuasion.

When we share our Scientific Analysis results with our clients, there is a strong theme running through of what the emotions on display are, and whether they are congruent or discongruent with the content of the discourse. However, some clients are initially unsure whether what they feel is an emotion, sometimes describing non-emotive words as emotions. Nervousness for example is a condition, not an emotion.

So, what is an emotion and what is a mood? This would seem an easy question to answer, but even though we all have emotions and can easily recognise them in others, when you give the question a prod, it can be hard to tell them apart.

Wikipedia defines an emotion as a strong feeling that comes from one’s mood, circumstances or relationships with others, and a mood as a temporary state of mind or feeling. Glad that’s clear!

The various emotional states have been catalogued by researchers, and I have read that there are over 34,000 such identifiable and distinguishable emotions! Prof. James Russell in 1989 came up with an early version of this list, with his Circumplex Model. He helpfully plotted them all on two axis – positive-negative and arousal-subdued.  Here is a simplified version, showing 28 core emotions: 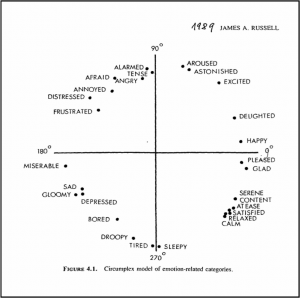 Mostly, emotional states are transient, easy come easy go, whilst moods last longer, perhaps from hours to days, and are harder to shake off.

If though the state lasts weeks to months, it is likely to be an affective disorder rather than a mood. You can of course also be ‘in a mood’ and have an emotional episode on top….

So here is our guide to distinguishing emotions from moods, with thanks to Ekman for sharing. He has also published a book called ‘The Nature of Emotion’, if you would like to read more. Ekman suggests that the difference is determined by 5 main factors: Duration, Provocation, Modulation, Awareness and (of course) Facial Expression.

Mostly, emotional states last for seconds to minutes, perhaps to hours (Ekman, 1984). It would be easy to agree that moods last longer than an emotional episode, perhaps from hours to days, and also that they are harder to shake off. If you think you are in one emotional state for hours, it is more likely that you have experienced a sequence of recurrent episodes of the same emotion. Hence, when it comes to, say, public speaking, one can feel anxious before and at the start, but this can quickly dissipate and a feeling of happiness or calmness can take its place (yes, it’s possible!). But anxiety can return.

The onset of an emotional episode requires a stimulus or provocation. It seems that the amount of stimulus required to trigger an emotion is less if that person is already in a related mood. For example, if you are feeling in a fairly positive mood today, then you should find it easier to feel elated, and so laugh and smile; it’s harder if however your day is not going so well. The same is true for negative emotions – an irritable mood can quickly lead to anger.

Modulate here means to regulate, or control your emotions, as distinct from our other use of the word in vocal pitch patterns. If there is a contemporaneous underlying mood, it appears that its harder to control or remove the overlaying emotion, or for that emotion to decay back to a neutral or non-emotive state. In addition, the emotion may be expressed at a more severe or advanced level.

Ekman suggests that we can all probably tell someone else what caused a particular emotion in us. Indeed we often refer to these as ‘emotional reactions’, so there must be a cause of the emotion  that we can refer back to. However, he suggests we’d find it harder to identify the trigger for the mood we’re in. Perhaps it’s our environment, and it’s even possible we imagined or created the trigger for the mood.

FACS makes it clear that we show emotions on our faces, and they are easy to read. Moods though do not have easily identifiable facial expressions, and indeed there may be nothing on display at all.

I do hope that by understanding moods and emotions better, you will become a little more self-aware (but not self-conscious), and that this in turn allows you to read others’ emotions and moods more effectively. Surely that is ‘grist to the mill’ for any of you engaged in persuasive communication.

Download a pdf of the article here: Emotions or Moods