Shhh! Let them have time to digest your golden nuggets

Whether or not you are a fan of Nicola Sturgeon, the current First Minister of Scotland, she is an impressive public speaker. As a long-standing Fellow of the Royal Society of Arts, in October last year I was fortunate to have a ringside seat for a talk she gave on the political hot potato that is Brexit (apologies for using the ‘B’ word in my very first paragraph!). 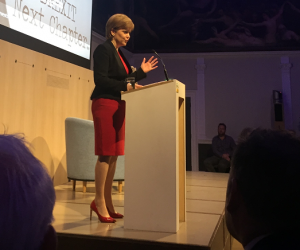 Nicola Sturgeon’s speech at the RSA

The First Minister’s speech was measured and articulate. She spoke with passion and conviction. Her pacing, rhythm and in particular the pauses she took after her making her most significant and important points allowed us, as audience members, the time to digest what she had just said.

All too often this skill is sorely lacking in those we choose (or have) to listen to at various meetings, conferences and workshops throughout the year. And even trainers often fail to deploy this skill themselves when delivering group training workshops!

We have all witnessed people delivering presentations and speeches while barely taking a breath. They fill any possible space with their favourite disfluency or pet phrase, rather than pausing to give their audience a reasonable time to think about the point they just made.

Indeed, many people who present seem to be in a tearing hurry to get to the end of their talk, barely engaging the members of their audience. This hardly inspires us as listeners – and the presenter has missed their opportunity to persuade us to do, think or feel something through the exhibit of a well-expressed point.

Pausing and allowing people to process what you just said is crucial if you want to land those golden nuggets on your audience and create a positive impression. Indeed, it’s not only important when we speak or present in public. If you use coaching in the day-to-day management of staff, you will understand the importance of pauses  in a 1-to-1 session. They have the same role in a group workshop.

These silences and pauses are where people are given time to review and reflect. They can consider what you said and what it might mean to them. They may even be thinking about what action they want to take as a result.

If you watch or listen to the speeches made by any of the great orators of the 20th and 21st centuries you will notice that they make great use of ‘the power of the pause’: Martin Luther King, Sir Winston Churchill, Presidents John Kennedy and Barrack Obama are all examples of speech givers who use this technique well.

In his book ‘Thank you for arguing’, the New York Times’ bestselling author and language expert, Jay Heinrichs, writes about Donald Trump’s particular technique and fondness for soundbites when giving a speech.

Heinrichs spotted a pattern in Trump’s speeches which aroused his curiosity. He explains:

“There is ancient method to the seeming madness. Watching one of the speeches, I decided to time those bursts. Each one lasted about 12 seconds. Interesting”.

This led Heinrichs to carry out some research on YouTube of speeches in Hollywood films, “from Braveheart to Hoosiers”. He made an interesting discovery, after watching countless such scenes, timing each one:

“From the moment the music wells up – signaling the climax of the speech – to the end. Twelve seconds, on average.  Rarely more than thirteen or less than eleven. Very interesting. Why? Because 12 seconds last about the length of a well-drawn human breath”

This often-used and well-known (to speech makers at least) centuries old rhetorical device is known as the ‘periodos’, originally a Greek word.

That brings me back to my starting point of the importance of giving yourself and your audience time by employing the power of the pause.

Why not experiment with this before your next important speech or presentation? Keep your mobile phone handy and set the timer or get the sound recorder app out.

Allow yourself to breathe fully and deeply. It’s an excellent way both to help manage any nerves you may have, and to prepare for the point you are about to make.

Be conscious of, time, and make a note of the length of the points you are making. Following the point you made, pause for several seconds. This will give your audience time to process what you’ve just said.

Do this for a number of your key points and notice the difference in how you feel. Play the sound file back, and/or play it to a friend or colleague, asking for their feedback.

Practise this way a few times and use this technique for your next talk. How was it different for you? What about your audience members?

Download a pdf of the article here: Time to Pause and Think