Growing trust with business partners has never been more important. A guest contributor helps us explore this area.

Regular readers will be very used to us covering the subject of persuasive communication, and how authenticity helps to develop both relationships and trust. Here Des reviews a contribution from an authority who corroborates some of our long-held views. Des gives some brief background, introduces you to communication-related elements of our guest’s thinking and draws some parallels with GPB’s own perspective.

GPB’s views are based on 25 years spent helping clients to develop more effective communication. Mark Hollyoake arrived at his conclusions after more than five years of exhaustive academic research in his specialist field, coupled with surveys and thorough, data-supported, real-world exploration with major clients.

Mark is a Director of Customer Attuned Ltd. Boasting a wealth of experience across the FMCG, Financial Services, Healthcare and Tech. sectors, he holds an MBA in Strategy from Henley, is an Associate Lecturer at UWE Business School, and is finalising his Doctoral thesis at the University of Southampton, on business-to-business (B2B) Trust theory. Ahead of his final submission, Mark shared the fruits of his painstaking efforts: an exclusive Speak Up “scoop”.

Einstein once claimed “whoever is careless with truth in small matters cannot be trusted in important affairs”1, a resonant view which provides our title  – but what exactly IS “trust”, anyway? Mark has developed the following definition of B2B Trust for his thesis: “The willingness to be vulnerable to another party, coupled with the decision to engage in actions based upon an understanding of ability, credibility, and expectations of mutual value exchange, over time” (Hollyoake, 2018).

He sees communication as fundamental in establishing, building and supporting trust in relationships (see first diagram, overleaf). Mark began by observing that trust is an over-used term in business, yet is a concept seldom fully appreciated or understood. For me, his point echoes an aphorism attributed to Lord Hanson, a successful late 20th century British businessman: “Synergy is like the Yeti.

It is often talked about but rarely seen.” Why might business trust share similar traits to those of Lord Hanson’s Yeti?

This theme, taken from Mark’s model, is significant for anyone interested in effective persuasion. He writes about Trust DNA™ operating within and between what he refers to as “the dyad”, an entity consisting of two parts, such as a B2B relationship between two organisations. It operates through two linked themes. Firstly, the relational commitment one side demonstrates to the other and, secondly, the way that relational intent is communicated and interpreted between the multiple levels within “the dyad”. He examines approaches best suited to the building of trust business relationships, through two key areas:

Mark identifies the value of effective communication, exploring the way it is undertaken both on a cognitive level (via use of suitable media) and on an effective level (through transmission of appropriate attitude, passion and positivity). 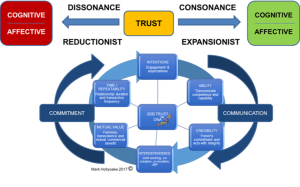 The intentions of senior executives may well be truly positive; with the potential to deliver mutual incremental value. If this is communicated inappropriately, however, its persuasive power will almost certainly be lost (an extreme example would be a one-off, top-down e-mail, using routine business language). This risks introducing mistrust and dissonance.

In the context of B2B relationships, Mark highlights a potential for communication to create either unwanted dissonance (conflict and contradiction) or consonance (congruent signalling and messaging, via authentic, effective persuasion). Which of these outcomes arises depends on ensuring good execution. Communicating well reinforces and confirms the benefits of trust-based actions, helping establish feed-back loops in a relationship.

Added value for all?

Mark suggests reviewing client P&Ls in order to develop trusted B2B relationships more consistently. Interrogate whether these fairly represent the amount of time, effort and financial investment put in by each party to achieve them. Does the relationship look commercially balanced, when you assess the value it delivers? Who takes what proportion of the benefits – and does this represent a ‘fair share’ of the incremental value generated? There doesn’t necessarily need to be a 50/50 sharing of enhanced benefits.

Any split should, however, reflect a share that is fair and reasonable for both sides. Such a situation will further engender mutual trust. Which should then be celebrated and acknowledged in positive communication; cascaded throughout both organisations, to reinforce and amplify the supportive behaviours that have initially generated such success.

There are six inter-linked key elements at the heart of Mark’s B2B Trust model, as shown above: Intentions; Ability; Credibility; Interdependence, Mutual Value and Time/Repeatability. These are all supported by Commitment and Communication. When the latter are correctly harnessed, they help to build trust positively (expansionist consonance effects). Failure to do so risks negative trust dilution (“reductionist dissonance impacts”). The ‘Credibility’ factors Mark maps call to mind David Maisters’ “Trust Equation”. I asked Mark about his view of Maisters’ work. He made some fascinating observations, whilst also providing an alternative equation model (see below).

During his years of exhaustive study, Mark has not come across evidence in any academic research to support applications of Maisters’ definition in a B2B context. While his ‘self-orientation’ concept could be liable to generate distrust, if openly used as a descriptive term. Mark’s thesis incorporates at least two elements he feels have been over-looked in all previous work in this field, including that of Maisters. Namely the creation of mutual benefit, and the impact of passing time in evolving differing levels and types of trust.

Finding Goldilocks in “The Forest”

Once trust is established, leaders must remain vigilant, aware that trust benefits from inhabiting an identified “Goldilocks Zone”; a zone where neither too much nor too little trust is allowed to operate across the relationship. Neither would generate the optimal degree of incremental benefit. The aim is to achieve the level of trust that is ‘just right’. Mark also identifies a “dark” side of trust, to be avoided. He calls this “Excessive Trust” (on the right, in the diagram below). It’s found in partnerships where there is an over-dependence; often exemplified in relationships established between a small group of key staff in each business, where over-reliance takes root, due to a lack of appropriate oversight.

How can business leaders best deploy effective communication to help build trust, then? Mark calls communication the metaphorical ‘oil’ of the business trust ‘engine’: lubricating, protecting and facilitating a smoother, longer-lasting process. His research again reinforces some of GPB’s own key messages on communication. Pro-active leaders develop trust as a key success factor via a genuine commitment to sharing authentic relationship intentions. These are then clearly communicated onwards for action throughout all levels of their organisation – and are reciprocated through those of the client partner.

All communication should be succinct, clear and accurate, but this is especially true where the development of vital trusting relationships is at stake. It must also be consistent across the leadership team, making sure conflicting messages don’t creep in; avoiding communication of any intent recognised to be unrealistic (which could return to haunt you, weaken your position and fatally undermine the future development of trust).

If any conflicts of message or attitude are perceived within your organisation’s leadership group, there is a risk that implementing managers may align to the views of those senior leaders most in step with their own preferred (perhaps ill-informed or historical) behaviours and attitudes. In order to project a shared and cohesive corporate stance, personal positions must be signposted as having been abandoned and ‘baggage’ left behind by individuals, throughout the chain of command. This will optimise the delivery of the organisation’s goals.

Leadership communication should never be delivered as a one-off or rarity, either. It should be seen as a valuable opportunity for ongoing dialogue. To be persuasive, leaders must be seen to ‘walk their talk’; deploying all influential media and channels, and not relying purely on, say, the odd e-mail.

One survey respondent observed:  “… email should be used only as a confirmation; not as a lobbed instruction into the ether… there are no subtleties and nuances and people interpret what they think you’ve written”. Ain’t that the truth?!

It is notoriously difficult to capture and project consistent meaning to a wide audience, via e-mail alone. Not least if it might be just one of hundreds received on any given day.

Using impactful  communication can turn positive intent into business reality more often. Delivering enhanced trust in relationships, in turn leads to incremental value gains for both parties. Consistently communicating persuasively and effectively, time and time again, even in the face of uncertainty, will build trust in your organisation – and in you as a leader and partner – with both your current and your potential future clients.

Effective briefing of staff at all levels on corporate intentions, with strong reinforcing communication between respective managerial levels, is key in optimising the activation of trust at an organisational level. It is also vital in cascading and projecting the original partnership intentions into a greater proportion of those inter-personal relationships whose development is essential, across the participating entities. By contrast, mis-used, abused, or simply poorly used communication (contradictory, discongruent and/or conflicting) is one basis for emerging dissonance and distrust, which will undermine the development and evolution of value-adding relationships. 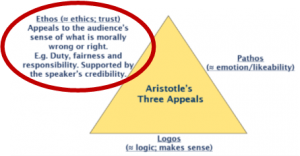 Mark’s independent research is the latest investigation into the impacts of communication in ‘real-world’ business environments. He offers a new B2B perspective on well-recognised themes.  If you want to discuss Mark’s thesis, ideas and working methods, and/or the impacts these could have in your organisation, or area of influence, GPB will gladly put you in contact with him.

If you would like clients to trust you and your team in “Important Affairs” more often than Lord Hanson sighted his synergy ‘yeti’, or you have doubts about your firm’s ability to achieve this, we’d happily help with all the communication aspects of trust-building.

Many things evolve and change in this crazy world, but the credentials required to be considered trustworthy, honest and authentic have remained broadly consistent at least since Shakespeare’s time, 400 years ago: “I know you wise… constant… for I well believe Thou wilt not utter what thou dost not know; And so far will I trust thee.”4

In fact, they’ve probably remained largely unchanged over the last 2,400 years, since Aristotle was a lad.

By Desmond Harney and Mark Hollyoake.

Mark Hollyoake’s doctoral thesis is due for publication later in 2019. We wish him the very best of luck with the rest of the process that lies ahead of him.

Download a pdf of the article here: Trusted in Important Affairs