Des considers the value of adopting a Style Guide.

Jacob Rees-Mogg (JR-M) became Leader of the House of Commons in July, with responsibility for arranging government business in that house. It was difficult news to miss here in the UK, even amidst a massive cabinet reshuffle.

Resultant media coverage included a frenzy of ‘scorn and mirth in equal measure’1 aimed at JR-M and his Style Guide, intended to inform his team’s communication.

It seemed easy to score points at the expense of the ‘Honourable Member for the 18th century’2 – but hold on just a moment. Forget the perceived character of the man. Ignore his much-pilloried public persona and values. In taking aim at vocabulary, grammatical error and linguistic and visual inconsistency (amongst other things), doesn’t JR-M make some valid point? For example, ‘CHECK your work’ – who would argue with that? 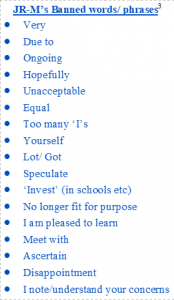 In truth, much of the ‘scorn and mirth’ generated arose from the perceived bizarre nature of some of his specific requirements, rather than from the concept of a guide per se. Idiosyncratic, time-warp oddities such as: ‘use Imperial measurements’ (not metric), address ‘all non-titled males [as] Esq.’; along with a controversial list of ‘banned words/phrases’. The key elements of JR-M’s guide are shown (in blue) here.3

GPB helps clients to enhance their communication in many different ways. This includes recommendations, for instance, on Content as well as on Vocal and Visual delivery. We advise the application of a consistent  approach to document appearance, vocabulary and grammar. In short, a Writing Style Guide. When offering that advice, however, we don’t expect laughter or scorn in return.

So, apart from for the sheer pleasure of point-scoring, why should JR-M have been so mercilessly mocked for his intervention? In principle, he shouldn’t have been. The mere existence and application of such a Guide should support the consistency and clarity of communication issuing from any organisation.

One powerful reason for the adoption of a Style Guide is that we inhabit a highly competitive world. One where there is often little or  nothing separating us from our competitors and where incorrect spelling or grammar might be the small, distracting difference that loses you work, rather than winning it. At GPB we call this ‘Factor 40’. Because (although it may come a long way down any potential client’s list of key differentiating factors) for equally-matched suppliers, style can, by process of elimination, become the single most important point of difference. 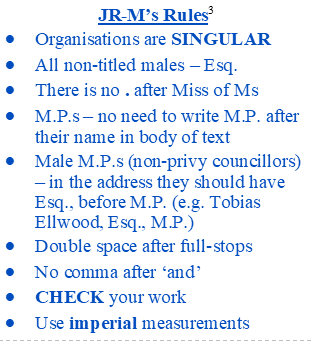 A Style Guide could, therefore, be of significant commercial value to your organisation, so long as it is adopted and its purpose is well understood. Although having one won’t atone for poorly conceived key messages – nor the ineffective expression of them. There is much more to persuasive communication than simply having a Style Guide, but that’s no justification for NOT having one. Whereas, its absence could be a contributing factor leading to miscommunication, distractions and failure to persuade effectively. Lack of attention to detail could, worst case, lead to lost opportunities – and revenues.

Style Guide should address; inconsistencies likely to otherwise affect your organisation’s communication. To avoid bizarre, idiosyncratic advice, GPB adopts and endorses the well-tried approaches and rules of less controversial influences than JR-M. These include the Plain English Campaign, The Economist’s Style Guide, Lynn Truss (author, journalist, self-appointed champion of the apostrophe) and good grammar in general. Adapting the words of one of JR-M’s idols: ‘Where there is error, may we bring truth. Where there is doubt, may we bring certainty…’4

It’s normally best to be right but, if you absolutely must be wrong, at least try to be wrong consistently!

Of course, if you set yourself up as an expert, there’s always somebody hoping to bring you back down to Earth with a bump. Within hours of    JR-M issuing his guidelines, ITV News had trawled through archives to identify instances where he’d fallen foul of those style pronouncements in his own inconsistent, historical communication.3

If, however, you’re now thinking, to any extent, about improving your organisation’s written communication via a Style Guide, then JR-M’s brief discomfort may have been entirely worth your while.

Download a pdf of the article here: The Style Guide