Earlier this year, I attended an entertaining and informative lecture at Gresham College London, delivered by an illustrious musical accompanist.  His talk was wonderfully engaging, peppered with pieces of piano playing, accompanying a soprano soloist,  and contrasting the differences between  highly-skilled and average accompanists.

In addition to his skills as a pianist, he spoke confidently at the front of the room; his voice was well-modulated with a rich timbre (tone quality) and good volume, when reading from a script, there were hardly any disfluencies.  All vocal aspects were pleasing to the ear; I enjoyed listening to him.  Furthermore, he was hugely knowledgeable on his topic and was compelling when explaining and illustrating his arguments.

All the same, there was one aspect of his delivery that I found odd, and rather off-putting. When returning to the lectern and speaking to the audience after playing a piece, he kept his eyes closed most of the time.  For me, this marred an otherwise near-perfect combination of content, structure and delivery.

This had me pondering further on the importance of delivery – or performance – in public speaking.  Of course there are plenty of speakers on the circuit today who feel delivery is as important as content, and who perform well.  Indeed, some might even be called ‘showmen’.  But there are far more for whom mediocrity and blandness seem entirely acceptable.  For this reason, I am often disappointed when attending UK conferences, small and large; the standard of delivery here seems so often to fall short.

The lack of importance placed on delivery, resulting in a lack of skills, is not a modern phenomenon.  As Professor Edith Hall asserts in her 19951 paper ‘Lawcourt Dramas: The Power of Performance in Greek Forensic Oratory’: ‘This neglect of the importance of performance in the Greek courtroom may partly be Aristotle’s responsibility’.

In his influential work ‘Rhetoric2’, Aristotle placed far greater importance on ‘what to speak’ (ha dei legein) rather than ‘how to speak’ (hôs dei eipein). He even went so far as to call delivery ‘vulgar’.

Interesting, then, that Hall says: ‘He rather grudgingly concedes, however, that the study of delivery is indispensable’.

Thankfully, his was not the only perspective at that time.  Again in this same paper, Hall writes: ‘Some ancient theorists were well aware that the spontaneous performance and delivery of all species of oratory played a big part in the effectiveness of the persuasion and the contents of the speeches themselves’.

In support, Hall quotes 4th   Century BC    rhetorician and   sophist, Alcidamas3, from  his   treatise ‘On the Sophists’: ‘For   who  does not know that to speak   on the spot is  a necessary thing   for those who speak in  the public   assembly, for those who go to  law,   and for those who make private  transactions?’

Alcidamas believed that the highest aim of any orator should be the ability to speak ‘ex tempore’ on any topic. We’d agree, the highest aim, like the ascent of Everest, is also the greatest challenge.

One of the greatest orators of the 20th Century, Sir Winston Churchill, certainly placed as much importance on the performance of his speeches as in their content, style and structure.

Of particular note is the time he devoted to their preparation. In his biography of Churchill, ‘Never Despair3’, Martin Gilbert offers some fascinating insights into just how painstaking Churchill was in this preparation, through one of Churchill’s Private Secretaries, (Sir) David Hunt.

Hunt describes the process as being ‘semi-public’: ‘A Private Secretary would sit beside him. This was partly so that he could be used to check any points on which Churchill felt doubtful, partly to be able to intervene if the speech appeared to be departing too far from the departmental brief and partly because Churchill liked having an audience.’ 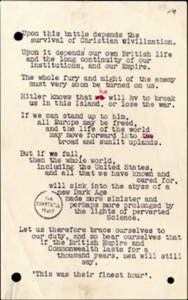 Hunt goes on to say that Churchill would: ‘take a sip of his weak whisky and soda, and perhaps draw on his cigar, and mutter a sentence to himself; he would repeat it, sometimes more than once, varying the choice of words and rolling them round his tongue until he had them just right, and then dictate them to be taken down.’

This was done with every single sentence!  Not surprisingly, the final version often differed vastly from the original.  This was then typed and arranged in page order by Churchill himself (leaving this to someone else in the past had resulted in disaster, with two entire pages being misplaced). Due to its appearance being similar to a song sheet, this was known in his Private Office as the ‘psalm form’.

This is yet more evidence of the similarly high importance Churchill placed on the performance aspect of his speeches as the content and structure.  These speeches took two or three weeks to prepare, not just of his time, but of the many interested ministries and other advisers who contributed facts and figures that Churchill would then put in to his own words, in addition to the work of the stenographers and private secretaries.

The importance of an audience’s perspective and their responses to how you deliver what you have prepared is not to be underestimated.  Whilst most people don’t have the resources to devote weeks of labour to their presentations, you can make that extra effort to rehearse what you’ve written  at least once or twice.  Perhaps record yourself and listen back, editing constructively so that you elevate your performances, and thus hopefully engage, persuade and delight your audiences all the more for doing so!

Download a pdf of the article here: The ‘How’ is as Important as the ‘What’