Alastair looks at the use of Logos, Pathos and Ethos and discusses the affect of social media on persuasion.

Aristotle developed his Three Appeals to persuasion some 2,400 years ago. Pathos, Logos and Ethos translate in into emotional appeal, logical argument and ethical trust. Aristotle postulated that these appeals are best used in  equal combination to communicate most persuasively. But with social media becoming more prominent, it’s worth asking how this balance might be affected.

In the 1970s, two American Professors Petty and Cacioppo, (P&C), advanced Aristotle’s ideas with The Elaboration Likelihood Model (ELM) of persuasion. They proposed two major routes to persuasion: the Central Route and the Peripheral Route. Under the Central Route, persuasion will likely result from a clear and well-argued message. An example might be Alastair Darling’s largely unemotive but logical arguments for why Scotland should stay in the Union. But P&C have more to say. They argue that for the Central Route to succeed, there are two important hurdles to jump. 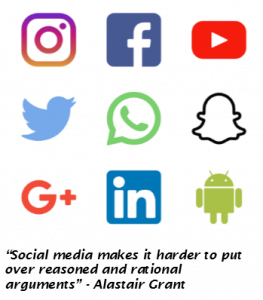 Firstly, the listener must be motivated to listen to what is being said, to process potentially complex information. Secondly, the listener must have the ability (from their existing knowledge) to understand what is being said. P&C go on to say that if the Central Route is successful, then the effects will be more firmly lodged for a longer period than the Peripheral Route. They also found that a lack of ability to understand or a lack of motivation meant that the listener decided using peripheral factors such as the speaker’s attractiveness.

President Trump scores well on emotional appeal to some, but logical argument appears to be given scant attention. As for ethical trust, well, I will let you form your own opinions..

In the Scottish Referendum the emotional appeal of Alex Salmond was out-pointed by “dry as a bone” Alastair Darling with his logic-based arguments. The main one was that the Scots would be worse off financially if they decided to go independent.

With Brexit, I would argue that most of us applied an emotional response, whether a Remainer or Leaver. Logical argument seemed to take a back seat, but why? Probably because the issues were far more complex and more difficult to understand. So, voters were more persuaded by the emotional attractiveness of people like Boris Johnson and Nigel Farage. The logical arguments of Michael Heseltine and Dominic Grieve failed to resonate in a febrile atmosphere.

We see Donald Trump, a charismatic speaker to some, outgunning more reasoned speakers. Truth is swept aside such that we get used to apparent falsehood. We also see efforts by hostile actors to influence opinion by hacking, providing multiple stories to discredit or confuse. The Skripol poisoning is an example. The Russians actively and widely practice Maskirovka (military deception) using Social Media and other channels.

It seems that people are becoming ever more polarised in their views on many issues, not just politics. Why is this? I suggest that it is the huge influence of social media such as Twitter, Snapchat, TikTok, WeChat, Facebook, and WhatsApp. People spend more time communicating electronically than in the past. This in turn means they source much less from the regulated media (Press, Radio, TV). Social media is characterised by quite short bursts of information to closed groups of receivers. Rational argument has no room when texting a short comment. Attention spans are reduced. On many social media feeds, anonymous senders can be found posting highly emotional comments that may be untrue or lack any balance. Some readers, suitably enraged by the outrageous remark, reply in kind. An escalation in showing contempt is enhanced and turbo charged in some cases by Maskirovka.

In the military, where I came from, we were schooled in the art of ‘Appreciating the Situation’. We had to look at facts and then produce deductions. A So What process. This was designed to keep us focused on a logical path to decision making and to avoid fitting arguments to what we thought was the solution, or as was called ‘Situating the Appreciation’.  It was using Logos to drive the show and factoring out Pathos-type gut feelings.

How does this fit the business scene? Business decisions seem mainly based on reasoned argument, but we also know that persuading the listener to follow the logic is harder now than in the past: shorter attention spans, more use of emotive words in text, emails and the rest. How might we advise our clients to overcome this?  Here are a number of ideas:

There is also a need to help those reporting to you to think creatively and logically. Edward de Bono’s ‘Six Thinking Hats’ has become even more relevant today with the impact of social media on how we think. De Bono encourages us to think in different ways. So, wearing a metaphorical Red Hat allows us to be emotive and express strong subjective feelings about a topic. We get it off our chest even though we know we must then adjust our inflamed thoughts in a more pragmatic style. A Black Hat allows us to be negative. Play the role of Devil’s Advocate. A Green Hat encourages creativity, A Yellow Hat means think positively – the opposite from the Black Hat. In running a meeting or discussion, attendees should be encouraged to share opinions wearing different hats. But try to start with a White Hat which is about facts and data, and finally wear a Blue Hat for summary and action. Social Media has made many of us default to Red Hat thinking.

To counterargue, Social Media makes it harder to put over arguments based on logical deduction and truthful data. It has made many of us less likely to take the effort to understand detail. So, in turn this means a fierce focus on communicating clearly and briefly and to debunk robustly falsehood. But it also means an educative process of encouraging managers to think objectively in the way we in the military were taught without red ink being sprawled over our faulty thinking!