If two forces are equal and opposite, nothing moves. Irresistible force meets immoveable object. To develop skills, motivation must exceed inertia.

During lockdown, lots of people have binged on box sets. We’re no exception: my family watched every Star Wars movie; except the ones we don’t like! It got me thinking about that hackneyed line “Use the Force, Luke”. Luke seemed to have a lot of trouble training himself to do so. The same it seems applies to us mortals, when it comes to learning to become better at using our voices, at doing the right things with our faces and gestures, and speaking the best set of words.

To understand this better we’ll need a bit of school-level Physics, most of which I have long forgotten. Newton’s First Law says colloquially that something won’t move (or change speed) unless you shove it. His Second Law is famously “F=MA”, where Force (newtons) = Mass (kg) x Acceleration (m/s2). So, Force is used to accelerate things, e.g. from stationary to a decent pace forwards. Thereafter, apparently, no Force is required to maintain speed, but that assumes we’re in a vacuum, and we’re not. There is the force of resistance, which can stop things from starting, and will slow things down after they have got going unless ‘something’ overcomes the resistance. So, we also need to mention Power (watts) = Energy (joules)/Time elapsed (seconds). In Physics, Power is a measure of strength, e.g. of an engine to pull or push an object through wind resistance or up a hill, or of a person to overcome a psychological obstacle.

How does this darned Physics apply to you and GPB?

Simples! We coach and advise people to develop their skills and knowledge and thus competence and persuasiveness. This requires them to have Force to start moving forwards and specifically to overcome the inertia to getting started, and then to have Power to keep things moving against the resistance to change, which can be large or small. I have had several conversations over the past 6 months both with coaches about just this.

Here, the sources of Inertia include a lack of time and a personality type that is resistance to change, fear of being foolish and of failure, and simply not knowing what to do. The sources of Force that we see include a key event (e.g. and IPO, fundraising roadshow, pitch or wedding), or your boss telling or asking you to do it. Best of all is the Force of self-motivation, that comes from an internal drive to improve oneself, possibly with a pay rise and/or ego boost at the end of it. Anticipation of such change, and making the change, can induce high states of nervousness and stress, some of which will be motivational.

Then we need Power, to keep going against the headwind. It seems to me that this comes from the same sources as the Force, but as it’s later in time, it can be high or low as can its opposing Force, and the latter will produce a reversion to the pre-condition (aka ‘going backwards’). This Force can be huge, even clinically identified as ‘glossophobia’, a fear of public speaking that can be triggered even months ahead of a known key event with serious mental health and sleep deprivation consequences.

We are often asked how to become a more confident speaker, and deal with nerves and stress when presenting. It is anecdotally known as one of the scariest work activities. Having to give a ‘difficult’ speech will cause a big increase in Cortisol levels, and more hesitation1. Heart Rate and Speech Rate are known to rise significantly, Disfluencies too.

The superficial answer is that this Confidence comes from (a) knowing you’ve got a great Story to tell (which comes from good content creation), plus (b) Practicing until you know you can tell it well (aka rehearsals), (c) Attitude (a positive mental one) and (d) Motivation (see also Force and Power above) to do the hard graft to get all of that done. Or, for the mathematicians, C = S+P+A+M. Yes, Confidence comes from SPAM! (other tinned meats are also available) 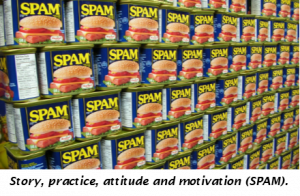 I want to focus on Power here. Put most simply, a presenter has to find “a power to push forwards that is felt to be much stronger than the power of the nerves pushing them back, and thus overcome the psychological obstacle”.  It’s easy to say but where does this forwards power come from?

In our experience, it is unique to each person, and often is a power they need our help to uncover. Our key questions for this include ‘why you?’ and ‘why are you really doing this presentation?’ If there is are common theme in answers it is that there is a ‘bigger cause’ that has required them to speak on this topic to this audience at this time. Examples include:

Firstly, a young woman who had already interviewed twice for a promotion as a radiologist and had been so nervous that she could not hold it together. For her third and final chance at promotion she came to us nearly a year before the key interview and presentation. We found her PO+ to be her desire to share more widely her expertise in spotting breast cancer diagnoses earlier, in order to save lives and reduce serious operations. We got to her have this front of mind when preparing and on the key days, and we were delighted to hear that she got the job. Many women with earlier breast cancer diagnoses can be grateful that she found the power to overcome the nerves.

Secondly, a young man who had both his wedding speech and then a high probability of a major shareholder conference speech to give. We found the PO+ for his wedding to be in his life for his fiancée and therefore the desire to ensure he started married life in the right way, and for the conference the sharing of a business strategy that was both admired and profitable compared with peers, that others could benefit from. The result? He gave a knockout wedding speech and is now happily married. The conference? That was cancelled (for now) due to Covid-19, but he may well be back on stage in 2021.

These examples among many we have seen show what’s possible, but to put it most simply, the Power driving you to do these stressful things has to easily exceed the Forces pushing you back. Time to call Luke….