Through the Perilous Fight?* 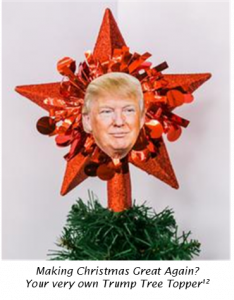 Four Christmases ago, the US electorate had just promoted someone who has been variously described as a combative, narcissistic, thin-skinned, self-publicist ‘reality’ TV host, to be Leader of the Free World. He wasn’t from your regular Presidential mould. Some contacts of mine have since described Trump  as “an excellent Communicator”.

Well, we typically gauge the effectiveness of someone’s communication by how much it persuades others. Trump’s continuing primary domestic target audience has remained his electoral support base. That’s arguably a deliberately divisive strategy. Perhaps it has worked for him, in some ways. But, in terms of persuading non-supporters, Trump has barely moved the needle in four years; he hasn’t really tried to.

When challenged, claims of his “excellence” typically contract to “He communicates a lot. Through Twitter. It’s clever!” I can’t refute the quantity claims. I’ll even supply some helpful metrics, but clever?

How might Donald Trump’s combative communication strategy (his Perilous Fight) influence ours? As it’s Christmas, we’ll call it his “Five Gold Rings”.

1) President of Twitter: I average 3.4 tweets per month, how about you? Trump  has managed a whopping 420 tweets per month over his Twitter lifetime. That’s around 14 tweets/day (or 122x my puny rate). And I’d hazard Trump’s output has been even higher over the last four years, since choosing Twitter as his principle presidential policy medium. So, by all means, anoint him President of Twitter, King even, if he insists but, as we’ll see, not “Excellent Communicator”. He‘s much more of a showman: ‘the charismatic, brilliant master of ceremonies… The ringmaster… a modern P.T. Barnum’1.

2) ‘Fake’ is a term Trump has routinely applied to news which ‘he didn’t like and didn’t fit with his narrative’1 and  which he countered with his own ‘alternative facts’2, aiming to sow doubt about mainstream reporting of his activities. Recently we’ve  had Trump tweeting about “fake” election results. Such tweets now routinely earn an official Twitter accuracy disclaimer, while more mainstream media simply cut him off in midstream, during his more fantastical “stolen election” rhetoric. I’ve heard a US father reference his para-triathlete son’s “fake pain”3, on hitting “the wall”, showing how such loaded words can gain insidious and unexpected wider usage: One journalist wrote recently that ‘The centrality of language to politics is ancient and recurrent’.4

3) Black and White: Nuance is rare in Trump world. You’re either Good or (Very) Bad. Either with him (you’d better be!), or against him. Either Making America Great Again or part of The Swamp. A (BIG) winner or a (sore) loser.

Even celebrated combat veterans are suspect: In 2015, Trump (with no war record of his own)  said of Senator John McCain: “He’s not a war hero… I like people who weren’t captured.”5 That definition would be a revelation for many. One US-based foreign observer said of Trump: “His most deep-rooted fear is the ‘Loser’ tag”6. That may help explain Trump’s desperate denials of electoral defeat. He claimed as late as 5th December that “We’ve never lost an election. We’re winning this election”.7

4) Superlatives: Trump famously tweeted that he was ’a very stable genius’ (see image below). In adjacent tweets, however, he used other typically extreme and illuminating vocabulary: ‘total hoax’, ‘Fake News’, ‘Crooked Clinton’, ‘VERY successful businessman’, and ‘top T.V. star’. Trump seems unfamiliar with Shakespeare’s ’Hamlet’ adage: he “doth protest too much, methinks“.8 Even the provenance of Trump’s superlative medical report is questioned: ‘astonishingly excellent… the healthiest individual ever elected to the presidency’. Ostensibly released by Trump’s personal physician, ‘could he possibly have had a little help with the drafting?’1 Trump’s fingerprints here (and elsewhere) are revealing. He forgets the Narnia author’s advice on exaggeration, offered to an American child: ‘… you’ll have no word left when you want to talk about something really infinite’.9 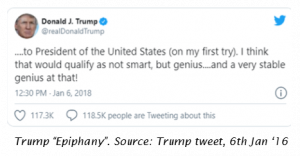 5) Baffling Statements: Of his first 100 days in office, Trump stated on 28 April 2017: “I thought it would be easier”10. Did he really say that out loud?  On 25 November 2020, he tweeted it was his ‘Great Honor’… to fully pardon convicted felon and perjurer Michael Flynn. In between these eyebrow-raisers, he frequently betrayed a deep  ignorance. Two of the many available examples should suffice to illustrate, here:

No partridge in a pear tree here, but what can we learn from Trump’s Five Gold Rings? Here are a few pointers:

These are Trumpian Communication gifts that all seem to just keep on giving!

* From the 3rd line of The Star Spangled Banner, the US National Anthem.

2) Counsellor to the President, Kellyanne Conway, in a Meet the Press interview, 22 Jan, 2017

8) En.wikipedia.org. 2020. The Lady Doth Protest Too Much, Methinks. [online] https://en.wikipedia.org/wiki/The_lady_doth_protest_too_much,_methinks.

10)  Adler, Stephen J., 2020. Exclusive: Trump Says He Thought Being President Would Be Easier Than His Old Life. [online] U.S. https://www.reuters.com/article/us-usa-Trump-100days-idUSKBN17U0CA.