Tunnelling out of Europe

Negotiations become steeper and faster as they reach their close. The trade deal discussions between the UK and EU have all the traits of a perfectly normal negotiation.

It’s a shame to have to write about these very troubled trade deal negotiations in this edition, as traditionally we steer away from the more serious issues in these Christmas Journals. But I feel duty bound to comment, and think we have something to say about this.

I’ll start by making it clear that I am pro a trade deal between the EU and UK, as it makes more economic sense than no deal. But this negotiation is not just about ’sense’. Second, I’m writing this as late as possible before publication in the hope that I have the latest changes to hand. But, as there are still two weeks from now to the end of the Transition Period on 31st December, there is much that could still, and likely will, change.

A quick review: The UK started this exit on 23rd June 2016 with 52% voting to leave the EU. The UK negotiated unskilfully in the initial period, negotiating then ratifying the Withdrawal Agreement Act on 23rd January 2020; it was unsatisfactory for the UK but good for the EU (in  a number of senses). Several extensions before and since then, and we arrive   here with two weeks to go having agreed some (97%) of the easiest parts of the deal, and are stuck on the last three  most difficult items. 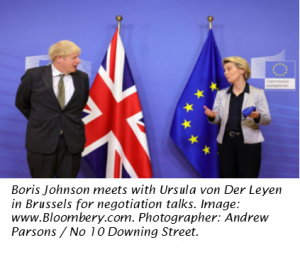 We have often written about how time is not a fixed concept, and the pace of negotiations this month, and then this past week and even on Saturday 5th December, when Boris met Ursula for dinner and a DMC (Deep, Meaningful Conversation), illustrate that concept. Talks have accelerated due to time pressure, itself forced into this negotiation by the creation of a (random) date by which things must get concluded. 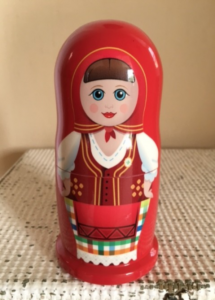 In 2007, my GPB co-founder, Alastair Grant, created the idea of three Babushka dolls as a metaphor for the different traits of a good negotiator.

In 20162 he added a new fourth and innermost doll, the Persister, as he found that one key skill of a negotiator is the ability to keep going for what might be a long time with no loss of energy, as in a marathon.

That persistence dynamic is certainly in play here, with participants and observers certainly being fed up. The Conservative’s 2019 slogan in that year’s UK General Election, ‘Get Brexit Done’3 played to the feeling of frustration with the slow progress made.

One key observation about this negotiation is that it’s completely standard. Nothing is happening that does not usually happen: disagreements leading to time outs and changes of negotiator, haggling in public, changing terms through concessions (traded and unilateral) using pathos arguments such as being pragmatic and conciliatory, the attempts by both sides to develop Relative Power over the other party using tactics and strategies. The final accelerated phase of intense discussions (aka “The Tunnel” in EU negotiations) over the three most contentious matters, or what Laura Kuenssberg of the BBC compared to ‘the mountain peak, the steps get harder and steeper as you’re nearly nearly there4. These are covered in all our training and in the better books on negotiation skills. Being paid more or being brighter, having more people and time, discussing bigger deals does not change any of that. Here is our summary: 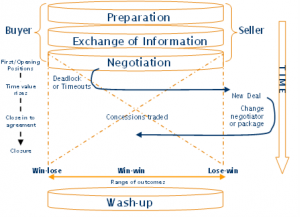 The last three Trade Deal sticking points are on principle, not economics. The key from the UK side is to be treated like an independent state, and not governed or policed by a foreign power. For the EU, the principle at stake is fairness and the avoidance therefore of gaining a competitive advantage, disguised as the metaphor ‘a level playing field’. In reality it’s fear of what the UK might do, i.e. ‘cheat’ by having more state aid or looser quality controls and grow its economy more quickly. As an aside, the EU also needs to show its members that leavers from its club don’t get to flourish, in order to discourage them from leaving,. So there’s a good mix of posturing  for its remaining members to see as well. Yes, it all really boils down to money (here disguised as prosperity, equality and independence).

But things have gotten rather silly when the parties are arguing over conceptual hypotheses that have a low probability of actually occurring. I doubt that the UK is about to end its quality control of drugs, food, and financial services (an ethical point) in order to sell more ‘stuff’ to people either in or outside the UK (a logical point). Yet that’s what the EU fears – and the UK has shown it cannot be fully trusted on this. The recent spat over the early approval of the Pfizer vaccine for Covid-19 is a very public example of that. The EU reaction was to suggest the UK had taken short cuts, whereas Trump in the USA reacted by ordering a summit5 to try to speed up approval and minimise the sense that the USA had ‘come 2nd’.

My second key observation is that we are all starting to panic because completing a trade deal is described as ‘success’ whilst no deal is described as ‘failure’. When working on client negotiations we probably earn most of our fee by reframing such erroneous thoughts, i.e. not always to see walkaway as failure. The idea that ‘No deal is better than a Bad Deal’ is really important here, that No Deal is not always worse. If someone offered you the market price for your house, and you just didn’t want to sell it, ‘no deal’ is the successful outcome. There should always be a workable alternative, labelled ‘BATNA’ (Best Alternative To a Negotiated Agreement) in the traditional training books, but even that has an implied bias that doing a deal is better. For the EU and UK this is WTO terms, currently given the label ‘Australian deal’.

I hope that the UK and EU agree a deal; just now it seems less likely; the probability has swung wildly in the last few days and even hours. But there are ways to settle how to trade between nations. Clocks will continue to tick on 1st January, and with luck, some of us will have an enjoyable Christmas break. I hope that turns out to be the case for all of you. Happy Christmas!