He had way more than three; here are another five...

Aristotle is a famous guy. He was a philosopher, writer and good at posing for statues. He is, to us, a leading light with his Three Appeals of Logos, Ethos and Pathos, and we even have a bust of him in our office to remind us of this. We have written here several times about the enduring high value of these three appeals in acts of persuasion, and we started to write about others in 2019. Here is a more elaborated review. 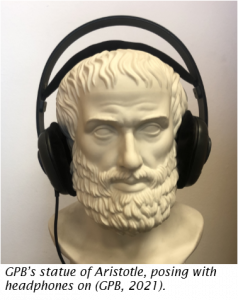 Is it because of the ‘Magic of Threes’ that his other appeals have been almost forgotten? Maybe they just aren’t as good? No, the review of them below tells us they are just as valid and just as helpful in building a compelling case, so we commend them to you.

Put most simply Kairos translates from Ancient Greek as ‘the right time’ or ‘good timing’, for example when to give a presentation or to do something. If you’ve ever climbed Everest (yes, a few of our clients actually have!), decided when a ‘push on’ should happen in a rowing race (I have),  or had the response ‘not now, I’m busy’ or ‘we just don’t have the budget/time/capacity for that’ then you’ll be familiar with this one. But I hope you’ll also have experienced the opposite ‘Ah, I’m glad you called, there’s something I’d like your help with’.

A wordier definition, would be: ‘a time when conditions are right for the accomplishment of a crucial action: the opportune and decisive moment’.1 Surely, getting this right has a great effect on the level of persuasiveness, and yet how much do we think about that before embarking on a major project? I think we all do this a bit, but even since choosing to write about this one, we have sharpened our timing.

Put most simply, Nomos translates as a Law, Convention, Conduct or Custom, which was distinguished in the 5th and 4th centuries BC from Physis, which meant the Law of Nature2. Nomoi is the plural. Simple customs include shaking hands when we meet new business counterparts (OK, not for the last year), greetings on emails and letters such as Hi/Hello and Yours/Best wishes, and saying your name when you call someone (even though these days your name would be stored on many of the other mobile phones you call).

So, what sorts of conventions and customs do we humans have that might affect persuasiveness? One that has always struck me as odd is that of hiring firms before experiencing any of their work, using other factors like ‘Do I know you’, creds and reputation (think of the Big 4 accounting firms and Magic Circle law firms) in our selection processes instead. This disadvantages smaller firms or those less well known. Here’s a couple of other unhelpful conventional thoughts: ‘Men are stronger’ and ‘Women multi-task better’. Some other conventions are well described these days by subconscious biases such as Affinity, Confirmation and Attribution bias3. Our advice would be to beware of convention!

Put most simply, Telos translates as Purpose, Intention, Final Aim or Result. It’s the second thing we ask our clients to consider when building a compelling case. FYI, the first thing is to think about your audience. “Why are you doing this, and what purpose do you serve?” are profound questions, and when we ask them, they trigger a really good discussion that seems to catch people out, and yet always changes a presentation for the better, as it gives everything a clear focus and body of argument. It is very good at helping us to move from Features to Benefits, as Telos describes what something does for the user, not what it is: A knife cuts things5.  So, our advice would be to define your Telos early on, then keep applying it to bring your benefits out. 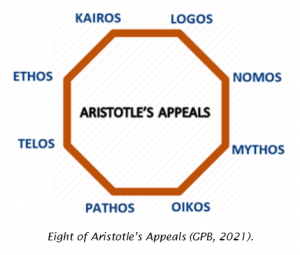 Put most simply, Oikos translates in a business sense as Team, although it originally meant Family or Household, being the main unit of Ancient Greek society. Every Team needs a Leader, and others as Members. The sharing of the persuasion between these parties is often poorly done, with the Team Leader doing too much of the talking. We heard about a PR pitch recently where that was the #1 reason why they lost a pitch.

Put most simply, Mythos translates as Myth, but it also means Belief and Story, whether true or not. It includes anecdotes, which are really just short stories. In Ancient Greek society, people acquired knowledge by analysis (Logos) and hearing stories (Mythos)6, and not only do we still do so, but it turns out from a bunch of recent scientific research that we humans actually prefer hearing stories over facts (who knew!?), finding them a much more engaging and thus memorable way to learn. If that act is learning why a provider should win a piece of work, then stories matter. Our advice is to include anecdotes or stories in your acts of persuasion, even though they will take a bit of extra time. Have you ever heard the one about….?

For the sake of space, I’ll stop the appeals there, but there are others that Aristotle reviewed. Take Hamartia (a character flaw) for example…

3. Reiners, B. (2021), 12 Unconscious bias examples and how to avoid them in the workplace. Built In. Available from: https://builtin.com/diversity-inclusion/unconscious-bias-examples [Accessed 21st March 2021].

6. Markova, I. (2021). The Diabolical Mind, Common Sense and Ethics: From mythos and irrationality towards logos and rationality. Cambridge University Press. Available from: https://www.cambridge.org/core/books/dialogical-mind/from-mythos-and-irrationality-towards-logos-and-rationality [Accessed 21st March 2021].