Plausibility, credibility and our emotions

Dominic Cummings serves to remind us that it’s what you say and the way you say it.

It’s probably fair to say that, when it comes to Aristotle’s three appeals of Logos, Ethos and Pathos, we can more easily identify when the credibility (ethos) of a speaker is enhanced or diminished due to facts, figures and the strength of their argument (logos). If an argument is clearly flawed, or facts are obviously inaccurate, plausibility inevitably plummets.

Without plausibility, persuasion is highly unlikely. Ancient rhetoricians played on this all the time in court speeches, whether for the plaintiff or the defendant. What isn’t as immediately apparent to us on a conscious level is the extent to which the emotions (pathos) aroused in us by a speaker affects our view of their credibility and authority. And credibility of an individual often goes hand in hand with the plausibility of an argument or the story behind that argument.

Given Dominic Cummings is back in the news, criticising the UK Govt’s early handling of Coronavirus to a Select Committee, it seemed timely to do a brief analysis of how pathos influenced ethos in the widely viewed ‘Rose Garden’ speech, i.e. the Press Conference held in the garden of 10 Downing Street on 25th May 2020. 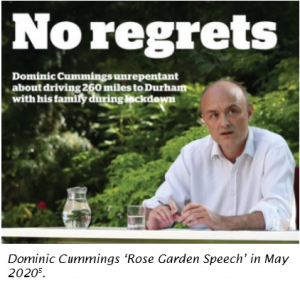 Looking at the relationship between speaker, the content of the speech and the audience and, in this example, how the speaker delivers the content can influence how we feel, which in turn can either enhance or diminish their credibility.

Many of you (especially UK residents) will remember that Cummings was seated in a garden, at a plain pop-up wooden table. You probably also remember that he was wearing a shirt without a tie, with his sleeves rolled up, reading from a script. Taking these elements together, and despite improving slightly on his usually very casual dress-code, as a viewer you might conclude that he wasn’t taking the situation seriously enough.

His immediate audience were members of the Press, but because it was being broadcast, there was a much larger public audience. Given the situation, it’s fair to say the public was hoping for, perhaps even expecting, an apology. It’s also fair to say that the prevailing reactions were likely to range from disappointment, disbelief, anger to disgust.

An experienced orator would be acutely aware of not just the content of their speech, but also the arrangement and style of the words they use to try to persuade their audience.

They will be mindful of the congruence of those words with their voice, facial expressions and other non-verbal body language.

They will probably have gauged the emotional temperature of their audience and taken advantage of it.

The content and delivery of Cummings’ speech merely served to amplify the prevailing emotions of the public, further diminishing his dubious credibility. He made no apology, nor did he seem contrite. He even said “the legal rules inevitably do not cover all circumstances, including those that I found myself in.” Although he didn’t say that he thought there was one set of rules for him and one set for others, the feeling conveyed was of someone who didn’t care.*

He appeared to make no appeal to our pity or sympathy. His facial expressions were devoid of emotion, and his voice had minimal modulation. No change in volume or speed. Completely bland. It seemed as though he had been coerced into holding this Press Conference.

The convoluted story was unconvincing: the additional trip to apparently visit an optician, and the claim that they didn’t stop to use the bathroom during such a long journey. These factors, and others added to the background situation, contributed to undermining his ethos.

If and when those in positions of influence or power flout the rules, we ask ourselves questions about their values and their integrity. Are they honourable? Are they even honest? Or are they hypocrites? In extraordinary times such as these, emotions are even more heightened and someone’s credibility can be ruined overnight.

What does this mean for you and me? As a speaker, it’s important to know as much as possible about your audience; their perception of you and your topic.

Consider the emotional appeals you want to amplify or arouse in your audience, alongside developing your arguments and thinking about how you are going to deliver your talk.

What opinion do you want your listeners to have of you when they leave? And as listeners, it’s useful to be aware how easily emotions, as well as reason, can sway our opinion of the speaker as much as the speech.