Stories (called ‘Mythos’ in ancient times) are a powerful tool, but how much should we rely on them?

This time of year is rich with stories, two of which dominate the western world, the Christian nativity and the story of Santa Claus or Father Christmas with his world travels on Christmas Eve. We even believe some tall stories as adults.

In his book ‘Talking to Strangers’, Malcolm Gladwell claims that humans are prone to believe blatant lying – and that judges are really no better at discerning who is lying than the general public.

According to Professor Timothy R. Levine, a deception-detecting expert whose research in this field was first published in 1990, his Truth Default Theory (TDT) differs from other techniques used to detect deception in one major way, in that it: ‘rejects the idea that the best way to detect deception is pay attention to nonverbal and verbal “cues”. Using cues make people poor lie detectors. My research shows that how people come off can be misleading and that there are much better ways to not getting fooled.’ 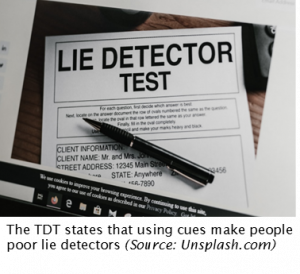 So how can we distinguish the truth from a ‘good’ but untrue story?  Well, the above cues are based on a set of assumptions we made much earlier in our lives.  Unfortunately, these can be played upon by people who are clever at disguising the truth.  For example, if what someone says is congruent with their facial expressions, we tend to believe what the person is saying. 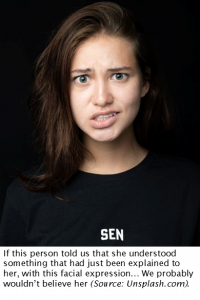 The Ancient Greek orators certainly knew how to exploit this ‘truth bias’ in their audiences. They employed a whole suite of deceptive rhetorical tools, from the manipulation of specific ‘facts’ of a case to outright fabrication of the truth, in order to persuade jurors of the veracity of their clients’ claims, whilst casting doubt on the truthfulness of those of their opponents. Apparently, the end justified the means, especially when it came to speeches delivered in court.  That‘s hardly surprising when the stakes could be as high as exile or the death sentence.

There are many clever and devious ways to obscure the truth through your argumentation that were used extensively by ancient rhetoricians, such as the use of enthymemes. These suppress the major or minor premise (or both), or even the conclusion of a syllogism and require the audience to fill in the blanks. For example: ‘You can’t trust [X] because s/he lied last week’. Enthymemes can hide flawed logic with the additional bonus of protecting the speaker from a potential law suit!

Tactics like burying weaker arguments in the middle of a speech were also very effective, especially when you consider that listeners had little time during a piece of oratory to reflect on, or analyse, a piece of logic.  Nowadays, for the most part we are able to read a transcript or replay the audio or video of a speech, allowing us to analyse those elements of the story that perhaps sounded off a few alarm bells on initial hearing. This is our greatest advantage over ancient times.

In addition to the use of well-disguised logical fallacies woven together with appeals to pathos and ethos, the ancient orators used the narrative section of their speech to develop aspects of a story that could be very convincing. Certain elements make a story seem far more plausible and authentic – even truthful.  Examining these masterful techniques can give us insights into how and where these are used in modern day rhetoric, whether by charismatic business people, the media or politicians.

I conducted an exercise earlier this year to scrutinise of parts of two well-known speeches by two eminent Ancient Greek rhetoricians, using the modern Criteria-Based Content Analysis (CBCA) forensic tool2 which was developed to evaluate the validity of witness statements.

The aim was to determine the veracity – and plausibility – of aspects of the narrative sections of these speeches, to see how they stood up to specific criteria, as the narrative seems to be where an audience (among them, crucially, jurors) could most easily be misled. Although too involved to go into in depth here, there are two criteria that I’d like to draw your attention to with respect to analysing stories, bearing in mind that the CBCA assumes truthfulness rather than deception: 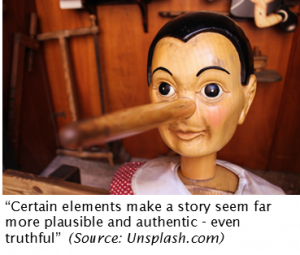 “This criterion is present if the statement is rich in detail and includes specific descriptions of place, time, persons, objects, and events”.

“…is present if the events are placed in time and location, and if the actions are connected with the other daily activities and/or customs”.

There’s a lovely example of both of these criteria in this excerpt from Demosthenes’ speech ‘Against Conon’:

….one evening, when I was taking a walk, as my custom was, in the agora with Phanostratus of Cephisia, a man of my own age, Ctesias, the son of the defendant, passed by me in a drunken state opposite the Leocorion, near the house of Pythodorus.”

This may or may not be truthful, but the quantity of details and description of daily customs provides a semblance of credibility which is very persuasive.

The lesson here is for us not to take things at face value.  Closer examination can reveal clever tricks and manipulation. Perhaps, also, it can reveal the truth!