Verbatim or extempore - or somewhere in between?

Do situations affect when best to use a scripted or spontaneous speech?

Among the celebrations during March is International Women’s Day, so I thought it fitting to cite examples of two speeches by two women for this article; both successful politicians.  One hails from the UK, the other from the US.  Both women trained in and practised law before embarking on a political  career.  One speech that I’ve chosen is from the deliberative (symbouleutic) genre (where the speaker tries to get action from the audience by describing a possible future) or rhetoric (with elements of display throughout). The other is from the display (epideictic—also known as ceremonial) genre. 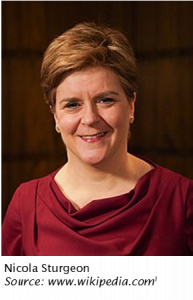 One speech I know well, having written about it some years ago in this journal, and analysed it for an academic essay last year; Nicola Sturgeon’s Keynote ‘Brexit speech2’ delivered to an audience of RSA Fellows in 2018 and  broadcast live by the BBC. She disarmed the audience early on with humour, referring to an article “Can politics ever be a source of wisdom rather than anxiety?” written the previous week by the RSA’s then Chief Executive, Matthew Taylor, stating:

“And that gives me a problem [this morning]. After all, I’m here to talk about Brexit – and any politician who talks about Brexit without a significant level of anxiety, clearly doesn’t have any wisdom!”

The other speech is one I came across recently, delivered almost 40 years   earlier, in 1969,  by a young Hillary  Rodham3 (now Clinton) at Wellesley College, Massachusetts, United States. She and her fellow graduates that year requested that a member of their class deliver the commencement address4; the clear candidate being Hillary Rodham. 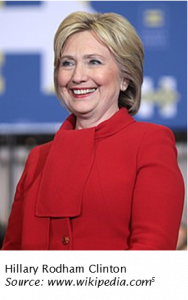 There are two unusual aspects to this speech; one is that it was the first of its kind at Wellesley in its 91 year history: the other is that her opening lines were impromptu.

Apparently, Ms Rodham was so infuriated by an implicit reference from the previous speaker, Senator Brooke, to women knowing their place, as homemakers, that she felt compelled to veer from her script and respond. One  memorable line is ..“the challenge now is to practice politics as the art of   making what appears to be impossible possible.”

While Nicola Sturgeon is obviously reading from a script, Hillary Rodham seems not to be, at least not from the short extract I’ve been able to watch.  She comes across as passionate and spontaneous.  Some might say that there is more display rhetoric than content, but I felt that her conveyed emotion shone through.

So which is better, a speech delivered from a detailed script or one composed and delivered on the spot?

I think it depends on the occasion and the topic. For example, a funeral oration (epitaphios), especially a public one, would usually be more formal, whereas a quick word of thanks might be informal.  However, one doesn’t want to forget to thank key people or important points, so you may well have prepared something like some prompts or notes.  If you are responding to someone else’s remarks, this may be more spontaneous and ad-lib.

One of the earliest recorded writers on this topic would probably disagree. Alcidamas, a star pupil of the renowned rhetorician, Gorgias (along with rival Isocrates),  wrote a pamphlet c.390 BC entitled ‘On those who write written speeches’ or ‘On the Sophists6’ This was an attack on those who thoroughly scripted their speeches rather than delivering them extempore.

He suggests that anyone can write a speech, having the luxury to indulge in days, or even weeks, of preparation in their production, ‘since writing is more readily available to us than speaking’.  I doubt we would agree that it is far easier to acquire the skill of writing than speaking extempore. His viewpoint is that of a privileged man with the advantage of an excellent rhetorical educat 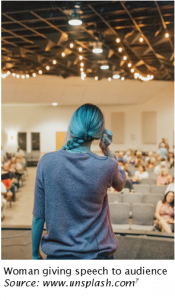 Whilst I take issue with ‘practising writing results in very great helplessness when it comes to speaking’, I agree with his assertion that ‘no-one would believe that those practised in writing will also be able to make a speech as a result of this same ability.’

Nowadays, we are less disdainful of a well-delivered, fully scripted speech, such as Nicola Sturgeon’s at the RSA. However, I think most of us find it  admirable, even exciting, to experience an obviously improvised speech. Even a small degree of spontaneity seems to energise an audience, as it clearly did with Hillary Rodham’s opening remarks.

When a speech is truly spontaneous, there is an intangible communication between audience and speaker; the  latter somehow able to improvise more effectively through the listeners’ attention. This is most obvious when a speaker is passionate about their  topic; they seem to be speaking from the heart. This is a challenging aspect to replicate using a script, or even detailed notes, such as a thick slide deck.

This is, after all, a spectrum (see Prompt Risk Profile graph below); from speeches delivered verbatim using a script through to entirely improvised, or somewhere in between. That might mean prompts on a slide in the form of images or text, or ‘thin notes’ written on a piece of A6 sized card. To improvise well, your priority is to know your audience and have a thorough knowledge of your subject matter. Either that, or hold impassioned opinions about your topic and be a very confident speaker. 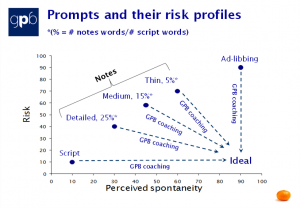 For all his criticism of scripts, even Alcidamas advises being well-prepared when speaking extempore!