K2 holds a unique allure for mountaineers. It is seen as the ‘climbers’ mountain and offers challenges like no other, testing all who attempt her to their limit and beyond.

The two main risks on summiting are time spent in the ‘death zone’ and risk of avalanches, both of which are maximized on K2 to create a haunting statistic: For every four people who have successfully got up to the top of the mountain, one has not come back. On August 1st 2008, K2 experienced its worst disaster when 11 climbers died; the news profoundly shocked the world. The shock was two-fold: how can so many experienced climbers die in one day, and what the hell happened?

To understand what happened some context is needed… Firstly, these mountaineers were some of the most experienced and meticulous people you could imagine. While they took risks, they rarely took uncalculated ones and always planned their up and down routes down to the last detail. Secondly, they had perfect weather for summiting that day, and had clear routes up and down. Thirdly, high-altitude mountain climbers by nature are inherently selfish and insular. They have complete faith in their own abilities but are less trusting of others unless they have first-hand experience of them. So, what went wrong?

According to Wilco van Rooijen, a Dutch climber who survived that day, the key problem came down to poor communication between the climbing teams. And since there were five separate teams who chose to summit that day it meant they had to co-operate to be successful. On K2 there is only one route up and down and it involves fine margins of timing and movement.

You are dependent on others to maintain their pace, because when bottlenecks happen in the ‘death zone’ people die. And K2 has the most famous bottleneck in mountaineering where a small change in pace can cause climbers to be overly exposed to the dangers of the death-zone and avalanches just below the summit. Somewhat ironically, if there is one thing high-altitude climbers dislike it is relying on others – even if they often have to. Unfortunately, this also can make them poor communicators. The first fatal mistake made that day was by one of the teams, the South Koreans and the slowest, decided to head out in front of the other teams without telling them. 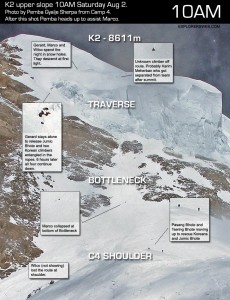 There had been an agreement amongst all teams to leave at first light on the 1st August – however no decision had been made on who should go first. The Koreans in their quest for glory had set in place a chain reaction that would seal the fate of 11 climbers including themselves. The consequence of this meant that the other climbers were forced to spend more time in the ‘death zone’ (over 7500m where a lack of oxygen causes the body to shut down); they began to suffer severe faults in their decision-making. A series of other more predictable errors, compounded by some bad luck, followed.

‘Summit fever’, the over-riding desire to reach the top at the risk of dying, started taking over. This is a well-known condition amongst elite climbers, using time and oxygen alarms to inform that their judgment has gone.

It is rare for an entire group to suffer from this condition but on this day, several climbers succumbed to it at once and spent too long collectively enjoying the view on the summit before descending. So, by the time the climbers started to descend the mountain most of those who died were already dead but didn’t know it. More errors, followed by oxygen starvation, were compounded by some bad luck. One Serbian climber uncharacteristically slipped. Another went after him to help him and perished too. The exhausted Koreans then took a prolonged rest in the death zone, which duly sealed their fate. Having sat down to rest, the lack of oxygen was not helping them recover and they started to atrophy and fall asleep.

The other climbers descended, bypassing the Koreans, but 6 others were unable to avoid a series of ice falls from seracs (ice overhangs from glaciers that can easily break off causing avalanches) which swept them away. Most tellingly, all the climbers who perished did so above or below the infamous ‘bottleneck’ shown in the picture above.

This story seems to have little to offer those of us who stay down mountains inhabiting the business world instead. So, what is the parallel here and what are the big lessons here for the rest of us?

Well, there are many things to be learnt about the consequence of this sort of miscommunication – and certainly it’s worth remembering that small decisions can have unpredictable impacts. The primary lesson is the need for co-ordinated communication between humans; even those in separate teams this overrules the more selfish motives. I also think there’s a clear lesson here in realising how interconnected we all really are, and we just don’t know it. But perhaps the most poignant lesson is in our inherently selfish nature in our daily quest for glory. While the quest for glory is admirable, just remember it can sometimes make us forget our duty of care for others.