Most of us suffer from a few umms and errs as we speak. They are a type of disfluency, and sit alongside other impediments such as words and expressions that add no value, for example ‘you know’, and ‘like’ or simply repeating words or phrases. They are all ‘vocal fillers’. There are many more!

How much do disfluencies matter? To an extent that depends on the situation. A thoughtful conversation between two relaxed friends sitting around a table may well be punctuated by a few casual disfluencies as they gather their thoughts and then speak. Usually, the absence of any pressure may keep the rate of disfluency low, as people often just pause instead. The hasty speaker may have lots; the point is that it doesn’t matter much in such a setting. 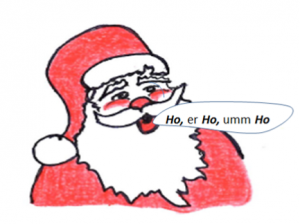 But when the stakes and pressure are high, e.g. speaking to influence and persuade, or handling a tough but crucial question, the speaker needs to be in an ‘umm free’ zone. Every word should be there for a reason. Yet under such pressure we often see the highest disfluency rate.

Then there is a half-way house, where a few umms and errs are acceptable. Indeed it is a challenge for most of us to be totally fluent. Dr Branka Zei of the Vox Institute in Geneva has taught us much about the impact of the human voice (and body language). We send her digital voice files for Scientific Analysis.

Examining years of scientific research, Dr Zei has concluded that up to 5 disfluencies a minute are acceptable. Beyond that, disfluencies have an increasingly negative impact on the image of the speaker in terms of conviction and persuasion.

The graph below shows a sample recorded voice in pink set against a relevant reference group in green, for 8 vocal parameters. Six parameters are reasonably good but look at the Info output rate (very slow) and Fluency (a very high rate). 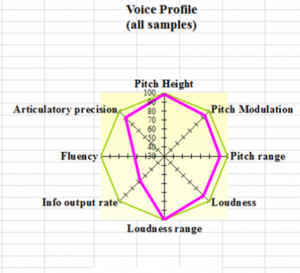 These scores are terrible, and research shows they severely damage the audience’s image of the speaker. Nobody would believe in Santa with this profile!

‘Just a Minute’ is a long-running BBC Radio 4 panel show. Contestants have to speak on a given subject without hesitation, deviation or repetition. This is a harmless and amusing game, but a scientific study of those who are skilled players could reveal that they are wired differently from the rest of us:

Researchers in Experimental Psychology at University College London have asked for volunteers to play Just a Minute whilst lying inside an MRI scanner.

The idea is to see if the best performers use a different part of their brain or different brain networks. The results, yet to be published, may help people overcome speaking difficulties.

We can’t put people into an MRI scanner, but we can significantly help those who are prone to disfluency, using our own version of ‘Just a Minute’.

Some people are so good they seem to be born as natural fluent speakers. It’s more likely that in their childhood the environment formed by their school, family and friends has resulted in high fluency. Generally they are admired and some might be even envious of their skills. An obvious career path for such people could be to become a barrister or politician. But others have to work hard at developing their skills.

Barack Obama, for one, realised that he had to train himself to be a more fluent speaker. It takes time and effort but there is a short cut!

GPB’s ‘Just a Minute at Christmas’

Here’s one game that you might play at Christmas as you sit around the table waiting to tuck into turkey or whatever has been chosen to feast on: taking turns, ask each person to talk for one minute on a topic they choose; someone else times this. The speaker must try to speak without a single umm or err for a whole minute. Every time they umm or err, the listeners press their imaginary vocal ‘buzzers’ – or interject. The speaker then has to start the minute again.

However, they are allowed one luxury, as it is Christmas after all: they are allowed to pause silently as they gather their thoughts. A curious thing then happens. Typically the speaker has about three or four re-starts and then they learn to pause between phrases, however awkwardly, and manage to stagger through a whole minute without a single disfluency. 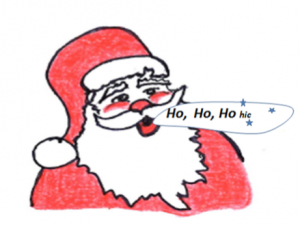 It is as though they imagine there is a high voltage electric cattle prodder which will send a shock each time a dreaded umm occurs. Their brain is re-training itself to pause instead of umming or erring. If someone is a bit too good, then give them the tougher version – no umms or errs, hesitations or repetition of useless expressions such as like, you know, kind of, and sort of. That will sort them out!

From all at GPB, have a Happy and most of all Fluent Christmas!