Anyone reading the other articles in this Journal will see a theme….that speaking in public seems to be a very important thing for company CEOs and other leaders of organisations to do, and do well. Yes, true, but why?

I recently addressed this question during a seminar (and some of you were there…). It is a constant query for us, so I thought we should download some of our thoughts to you, and see what we can do about it.

Actually, we should first challenge the premise, as we don’t really know for sure that CEOs aren’t banging out the grandest greatest most inspirational speeches of all time, as most of their speeches are done behind closed doors, in private.

So let’s assume that at least a few do, and if you could write in to tell us who, we’d be delighted (Rule 1: You can’t choose your boss). 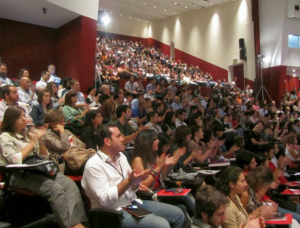 A second challenge could even be on the idea that such speeches should be given. But if that were the case, then why do CEO forums ask me to pontificate on the subject? No, I don’t think that’s it.

From what people who work for a living tell me, most CEOs just don’t give killer speeches. Some give some quite good ones, some are even called ‘motivational’, but when challenged to tell me what the messages were, there is an awkward silence… and then an admission that whilst they were ‘moved’, they are not sure why, where or how.

The commonly stated reasons for the absence of killer speeches include (a) the CEOs don’t know how to give one, (b) it’s too risky, (c) they don’t have a forum for doing so, (d) they don’t have time to prepare, (e) what’s the point? and (f) all or a combination of the above.

That first reason is a bit tragic given the amount of money spent on CEO communications in its various guises. It’s a tidy sum, largely devoted to internal resources, but some of it is even spent on us! Could inability really be the main cause?

The second reason – risk – is the most common one given. These CEOs are marshalling vast sums of shareholders’ money, and they have seen many a fellow or famous CEO burned in public by saying the wrong thing. But surely if a ‘Killer Speech’ is needed to move or motivate people, to cause a change in behaviour, energy, or action, the risk is worth taking. Indeed, surely it is not negotiable, it just has to be done, with all avoidable risks mitigated. Richard Keith’s article on p. 3-4 has more on that.

The trouble is that removing anything interesting, controversial, outspoken or radical i.e. ‘risky’, that might be said, takes out the ‘kill’ from ‘killer’…. leaving you just with, well… ‘er’.

If you (as I do) accept the theme of Richard’s article in this publication – that speakers should be a bit more daring – then it would seem that this is more a smoke screen than a real reason.

The ‘lack of a forum’ reason is surely also not legit. There are ‘Town Halls’ in town halls all over the place – communication events where the CEO speaks to senior staff or all staff to get a message across, to stir management and employees to greater achievement, to achieve stretch targets, to ‘new paradigms’ on long hard ‘journeys’, and to think/work/perform ‘outside the envelope’. This language may be a further reason for the lack of killer speeches, but let’s not go there….

The Roman Forum, where (literally) Killer Speeches were often given. 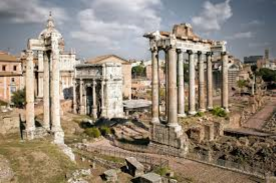 Lack of time to prepare? Are you kidding? Most CEOs we work with recite their job description as ‘speaking to people all the time, with a bit of strategizing in between’. Frankly, whilst it might be true, CEOs absolutely need to make the time!

“‘What’s the point? I haven’t got anything killer to say” . I don’t’ think this is a good reason. Whilst it’s good to challenge the purpose and effectiveness of actions from time to time – as our guest article on Virtual Reality training aptly does, the ‘point’ of the Killer Speech should be obvious – it is to get a vital message across immediately to a small, medium or large group of important people (which can run to thousands of people at all-staff off-sites) in the most effective and compelling way.

Emails don’t tend to do it as acts of ‘killer communication’, although we have all seen emails that killed a CEO’s career. Sending out staff documents doesn’t cut the mustard either. No, it needs to be a killer speech from the CEO in person.

So, what’s the answer?

We think the real reason IS the first one – most CEOs are willing enough, but they just don’t know how to create and deliver killer speeches.

They have not been through Aristotle’s Three Appeals, they have not learned the use of Rhetorical Tools at University degree level, and have not studied the modern scientific research on persuasion.They have not deconstructed speeches to analyse structure, flow, linkage, and signposting.

They are chemists, accountants, lawyers, bankers, and business people. Where on those career paths did Killer Speech training get a mention?!

So, the first time they get to CEO level they find the job involves a lot of ‘jaw-jaw’, and they set about earnestly learning a new skill with varying amounts of success. And yes, it is a skill anyone can learn. That’s where we come in. Or you can try to learn everything by buying a ‘how to’ book at the airport. Good luck with that!