After Alastair’s mainly philosophical article, here are some more practical tips for the thrust and parry of negotiating.

Some have argued that life itself is one long negotiation. Balancing our desires with the desires of others is a daily occurrence that often requires skilful communication. Post-Brexit, the UK is now beginning one of the most significant negotiations in its history in order to position itself for trade and investment outside the EU. To be successful, the negotiation skills of those sent in to do this will need to be rapier-sharp.

We at GPB define negotiation as: “The method used to reach agreement by two parties who initially disagree”. In business we all negotiate overtly all the time, whether that be over trade, employment or even the management of staff and tasks. It’s clearly an important commercial (and political!) skill, so here’s a reminder of the key points to remember.

Prepare well before the negotiation (Doll 1)

Sounds obvious, doesn’t it. But what does ‘preparation’ mean exactly? Well, you have to work out what your persuasive case is. You have to know what style of negotiation is your natural tendency (more on style in a moment). You need to know what success looks like – that is, what are your objectives and key priorities? You need to determine also what are the deal breakers: at what point will you walk away?

When preparing remember to be open with yourself (and your team) about the hidden issues and weaknesses your opponent may exploit.That way you can establish a counter strategy for when your opponents start picking at those holes. 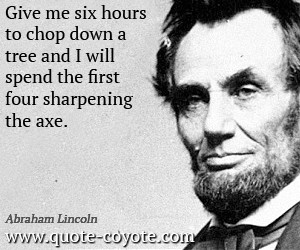 Abe’s moonlighting as a lumberjack taught him much he could use back in Washington:

It is always useful to know whether you are aiming for a Synergistic outcome, where you want to get the best for both parties; or you are striving for the more common Antagonistic outcome, using your strengths to persuade or pressure the other side into giving away concessions until they concede victory.

The antagonistic outcome is the more frequently sought, but be open to the times when a synergistic outcome will be preferable. For example, if you are seeking a profitable long-term alliance then bashing an opponent into submission on the first deal may not be the best way to start the relationship. Yet, a synergistic outcome is harder to achieve – it requires trust, openness, and most importantly an alignment of both parties from the start that a ‘win-win’ is what everyone wants.

In ‘Enter the Dragon’ Bruce Lee is asked about his style of combat; he nonchalantly replies: “My style? You could call it the art of fighting without fighting.” 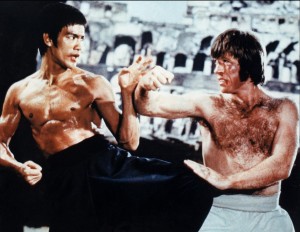 Of course, Bruce didn’t always rely on ‘fighting without fighting’.

Whilst you don’t need the same mastery of your inner ch’i that Bruce possessed, knowing whether you are a Director/Street Fighter, a Showman/Creative, a Relator/Pacifier or an Analyst/Executive will tell you a significant amount about how you are likely to respond when negotiating.

By knowing your own style, and understanding the style of others, you will be able to adjust your natural tendencies to strengthen your position when need be.

It’s a common mistake to believe that everybody wants the same thing in a negotiation; it’s usually not the case. Therefore, if you can offer things that you don’t mind letting go of but that your opponent perceives as highly valuable, both of you feel good.

Ask for more than you expect/want at the beginning

Your starting point is also your baseline – you can’t easily ask for more afterwards, so don’t be afraid to stretch up high at the start. Providing it’s still a credible starting point, asking for more at the start raises the perceived value of what it is you are offering. Heck, they might even say yes straight away!

In a negotiation, is better not to accept their first offer. Rather, use a little visual or vocal cue (the ‘flinch’, as Alastair says) to show your opponent you weren’t expecting such a cruel whipping from the off, no matter what they begin with.

Finally, remember that negotiating is highly emotional and you should try your best not to let emotions affect you, including after the negotiation has concluded. In the 2012 American movie Arbitrage1, Richard Gere has just negotiated the sale of his hedge fund for $525m; he then turns to the buyer and says:

“What would you have paid?”

Gere nods and starts slowly to walk away. Then he stops, turns back and whispers confidentially in the man’s ear:

With a wry smile, and a simple pat on his shoulder, Gere drives an emotional stake into the heart of his opponent’s perception of success. There is only one winner here. No matter what the tangible outcome of a negotiation, feeling as if you could have done better feels the same as losing, and could even feel worse.

So whether your next negotiation is the sale of a fund or company, your promotion to Partner, or a post-Brexit trade deal with the EU, consistently whetting this essential skill set will serve your career very well indeed.