Gestures - the good, the bad and the rude by Ewan Pearson

Some gestures offend, others inspire, and there is an enormous range of good to bad, genuine to fake, small to large and different types of them. Where to start…

We use a simple categorisation of gestures at GPB, into these 6 types:

Our advice is to use the first 4 only, to use them in the appropriate size and more frequently than you may think, to ensure they are always your gestures and not fake, to use them to help with congruence, and to mix up the types of gestures so that they’re not all of one sort.

All gestures should have a purpose and contribute to the communication.

These convey information, e.g. a size, dimension, number, or contrast. We count numbers on our fingers, which can be very useful in signposting progress in a presentation. This gesture can also be used to show precision, by closing a gap or showing no gap.

The man below, interviewed in a radio studio, gestures to emphasise a point. 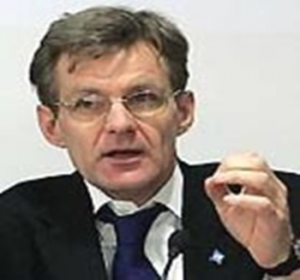 A precision type of Iconic gesture

Sebastian Vettel, the F1 driver, as a fine one for these, gesticulating “Number 1” to the camera and crowd with his index finger whenever he wins a race. For scuba divers and sign linguists, these are the only easy way to communicate things.

These are the ‘beats and batons’ of visual communication. We beat the rhythm and timing, and especially where we want to put our emphasis. This emphatic use goes with the vocal emphasis on key words (or even syllables). There is a scientific link between the brain areas for this type of gesture and vocal emphasis, and A precision type of Iconic gesture they usually work well together. 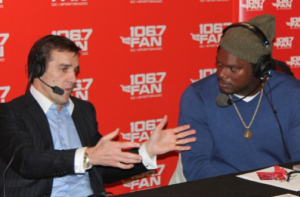 These are our pointing gestures, and can be directed at a slide, a colleague (so long as this is done politely, e.g. an open palm shown to one side rather finger tip at their eyes), but they are also those where we point to ourselves (e.g. your finger tip pointing to your chest), or somewhere in space, to a place, or entity (God is usually shown with an upwards point). 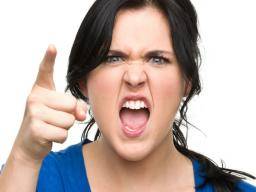 This women is pointing at someone and is clearly not happy about something!

These are harder to describe, as they refer to non-literal topics. If you’ve had a bad client meeting and a colleague later asks how it went, you might say ‘a bit so-so’ and gesture with the palm down, tipping it left and right. The meaning is usually quite clear to the recipient.

You might want to describe something in the past, and point over your shoulder, or in the future by moving your index finger over some imaginary bridges to show ‘the day after the day after tomorrow’.

We are usually unaware of these until some presentation coach comes along and tells us that we are doing them repeatedly, and tells us to stop. We then wait till this coach is out of the room, and start again, as they are (bad) habits.

So what are these tells? They are usually repeated gestures, often where we touch somewhere on our face or upper body, or we rub our hands, or we touch something we’re wearing such as a ring or play with or click a pen. They also include swinging side to side in chairs and the nervous swaying and other movements you sometimes see from presenters on a stage. There are many reasons why we do tells, the main ones seem to be nervous anxiety, caused by our negative feelings about the occasion, or the nervous energy of the kind you see from someone who just can’t sit still, but instead engages in constant motion or fidgeting.

Our advice is simple: put the hands/body to work by doing something meaningful, with purpose, congruently with the other parts of your communication.

These are deliberate and designed to cause offence. But they are also quite specific to cultures, and even quite localised, so you can fail to cause offence even when specifically intended! The simple advice is: Don’t. But that can be hard to achieve when in a foreign country, where the display rules are unknown to you. As different cultures and countries have their own rude gestures, you had better get to know what they are so that you can avoid causing offence unintentionally. For example, in some Arab cultures, showing the soles of your feet to them is rude, yet is part of a relaxed posture in West.

Showing the middle finger (salute) is generally rude in most countries, but holding up the 2nd/index and 5th fingers whilst holding folded the 3rd and 4th fingers (which creates the horns of a bull gesture) is a gesture that is mostly rude only in certain areas of Europe. Often people are non-plussed by this gesture in the UK (yes I have tested that theory!).

Churchill famously held two fingers iconically in a V (for Victory). Originally he pointed at the crowd then switched, as you can see below, after being told to change it. In some countries people count by straightening out fingers one at a time, starting with the index finger, so the number 2 becomes a rude gesture, quite accidentally.

Most people don’t gesture enough or make them large enough, and need to gesture more, but always with a purpose. Often they lack variety, or use only one side. Gestures are better asymmetrical, but there should be a good variety among the 4 types we recommend you use.

Congruence with the discourse

Gestures should always be natural, not staged or ‘fake’. The best way to achieve this is to be thinking about what you’re saying, and adding gestures from your own personal repertoire that match the words you’re saying.