Alastair Grant gives some advice on ‘what to do’ and ‘what not to do’ during a wedding speech.

For many years, I have been advising and coaching others in affective business presentations and pitches. I tend to avoid helping those who are making a speech at a wedding. Although, there was one occasion where I helped a manager who was required to make a eulogy about a colleague, killed in an aircraft accident. This was a hard one as he hardly knew the colleague. This summer our daughter was married and so I set about preparing and delivering the Father of the Bride speech. Friends would say this should be right up my street as one who coaches others. Not so! A wedding speech is in content terms quite different. No PowerPoint, perhaps no key messages. A need to say nice things, but also to amuse. An audience that spans young to very old.

What is the same is to harness one’s best delivery skills. The need to pause, gain eye contact, to have the right voice inflection.

So, what have I learnt from my experience?  First of all, I was clear that, not being a natural “off the cuff man”, I would write out the words as a script. Firstly, there are some well-established headings:

What not to do: 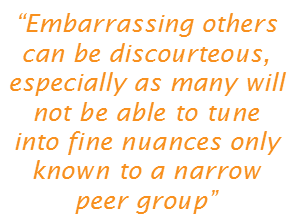 One thing that did not go well was the PA system. I was given a hand microphone and quickly found my voice became distorted if too close or inaudible if too far away. Getting it at exactly the right distance was very distracting. It would have been better to have the microphone on a stand and not waving around in my hand.

My start was to say that this was my first ever Father of the Bride speech…and my last. Although an attempt to gain a smile, it was also my thought that time spent in preparation was important. With only one daughter I hope I won’t have to do it again!

Download a pdf of the article here: Wedding Speeches