Des looks to The Beautiful Game for communication tips

Recently the business of football (“the only global sport in the world [sic] with more than four billion fans”1) inadvertently gave us some insights into the importance of prioritising effective communication. On Sunday 18th April, media rumours and leaks were followed by an official launch announcement of the glitzy, high-value football venture, The European Super League (ESL). Less than three days later, that proposed new enterprise was effectively dead and buried.

What went so wrong so fast? And can we learn from this example to improve our communication effectiveness? I’ll reference GPB’s (Magnificent) Seven Rhetorical Canons to explore how a more methodical approach could have benefited ESL’s launch strategy case.

“For many years the wealthiest, biggest clubs in Europe have used the threat of a breakaway Super League as a negotiating tactic”2. So when an announcement was made about ESL’s imminent launch, just hours ahead of a planned press conference scheduled by European football’s governing body (UEFA), it was just assumed by many to be the start of yet another round of very public negotiation by those ‘biggest clubs’. That they would use this tactic to try to secure increased control of UEFA’s Champions League tournament (UCL) – and its revenues.

Since agreement appeared to have already been reached between UEFA and the clubs on a planned UCL expansion, it also seemed some of them had been acting in bad faith in those discussions – which may have tainted ESL’s reception.

There’s normally a delicate power balance in play between UEFA and the major clubs. The latter are effectively products within UEFA’s attractive brand portfolio. With their allure combined into a single competitive tournament, they are like cat-nip to some advertisers and sponsors. Even though each stand-alone club holds comparatively little appeal internationally. However, after more than a year of Covid-reduced club revenues, something seemed to have shifted in that power balance.

Frustrated by an ever-present financial risk (of potential failure to requalify annually for the lucrative UCL) twelve of the world’s biggest football clubs (six English, three Spanish and three Italian) decided to combine their appeal into a rival, break-away competition. Only they and three further un-named founding clubs, plus five hand-picked invited guest clubs, would qualify for ESL each year. It was to be a direct replacement for UCL. But, critically, with these clubs themselves controlling all revenues.

The breakaway twelve are all in the top 16 of Forbes’s 2021 list of the world’s most valuable football clubs, where their combined worth is given as US$34.4 billion. It was relatively easy then for critics to define ESL as a project for the benefit of  football’s ‘Haves’ at the expense of its relative ‘Have-Nots’.

ESL was clearly the result of detailed discussion, planning and negotiation amongst The Twelve. Yet, despite this, by failing to systematically adopt the Seven Rhetorical Canons as the basis of their persuasive approach, The Twelve delivered an abject, high profile, own-goal of a launch – and “an international political incident”3. Thus illustrating for us all the potential cost of failure to develop thorough communication plans.

The image below outlines the Seven Rhetorical Canons methodology GPB has developed. Building on the works of Aristotle and others, it helps our clients to develop more compelling, persuasive communication. Let’s begin with Canon 1: to consider the make up of your audience FIRST. This is the logical start point. It’s likely that not doing so thoroughly enough was one of ESL’s first mistakes. 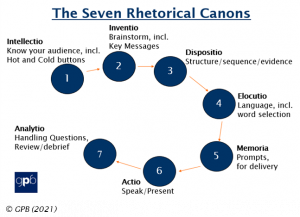 Who exactly were ESL’s audience? The answer turned out to be a very complex one. Among many, it included: the great football-watching public, a wider public, the sport’s governing international and national bodies, the excluded clubs, sports pundits, media commentators, and governments. Identifying each group’s main motivations (their “Hot and Cold Buttons”) and addressing all of these would require robust analysis.

This first Rhetorical Canon is essential. Getting it wrong risks undermining efforts in the later Canons. E.g. If you don’t accurately map your audience and their motivations, you’ll struggle to brainstorm and identify the best Key Messages with which to persuade them (Canon 2). Developing the appropriate structure, sequence and evidence to optimise your persuasive case will then be more difficult (Canon 3). As will choosing the most appropriate and persuasive language (Canon 4). Then deciding how best to present your case – and through which channels and forums – will become more problematic (Canon 6). Canon 5 is less directly relevant to the ESL story, but it can also be an important factor. It’s discussed in previous GPB Journals. Questions will, however, also be harder to anticipate and handle well (Canon 7). If ESL had identified  their audience’s complexity and potential hostility better in advance, they might well have decided not to launch at all.

ESL’s sub-optimal analysis of its audience rapidly became clear. Faced with a statement short on detail, but with a vague assertion that ESL’s intent was “to save football”4 its opponents were immediately able to rubbish that claim. ESL’s proponents lacked the credible arguments and trusted status needed to gain popular support. Instead, it found itself vociferously opposed by a more powerful, influential, credible (and yet perhaps unlikely) informal coalition.

That coalition included a former England captain (Alan Shearer – plus other high profile TV pundits and former players), a future king (Prince William, President of the FA), the UK government (via its Prime Minister and Culture Secretary) and its main opposition party, football authorities and, it seemed, most English football fans and players (the clubs’ employees). Meanwhile German clubs, part-owned by and more answerable to their fans, were notably absent from this group of self-titled “Best Clubs”5.

Far from having ‘saving football’ at heart, it was easily asserted that ESL was merely a rather cynical attempt to secure the future financial health of the few clubs at the top. The opposing coalition felt, despite ESL’s shallow claims to the contrary, that it posed an existential threat with “the potential to end the club game, as we know it”2.

If ESL had done its communication planning homework thoroughly, an information and charm offensive would surely have now followed (or even preceded). Anticipating, addressing and defusing most of its opponents’ potential worries and allaying any simmering discontent. Those concerned settled down, expecting to experience a highly coordinated well-planned response. But it never came. 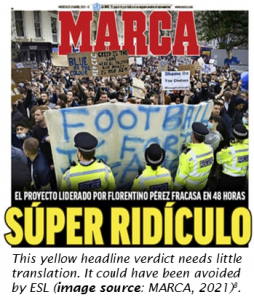 Instead we witnessed the media equivalent of tumbleweeds. Not only did ESL’s audience analysis appear poor but, compounding matters further, there also seemed to be no meaningful communication plan to follow-up or develop that initial, bald statement of intent. There was little attempt to speak or present (Canon 6). A derisory two-page ESL website did appear5, but there were few human voices backing its woolly, abstract, disembodied words.

Florentino Pérez (Real Madrid President and ESL Chairman) was a notable exception but, tellingly, he belatedly spoke first via a little-watched Spanish digital station. There, he accentuated the negative: stating that 40% of 16-24 year-olds have no interest in football (conveniently ignoring the 60% who do), and also suggesting that the c. 160 year-old tradition of 90-minute fixtures could be abandoned, for a shorter format better suited to the reduced attention spans of modern youth. Such reactive, limited, off-target responses to the range of negative reactions surfacing was baffling. To students of effective persuasion, the unravelling of the ESL seemed to be imminent – and that’s precisely what happened next.

Faced with opprobrium and accusations of ‘betrayal’ (well-chosen emotive language), within 24 hours the signatory clubs began to withdraw from their own agreement. They offered sincere apologies for poor judgment – rather than for “preposterous arrogance”6 in hatching a “sinister scheme”7. But the damage had already been done and the communication ‘battle’ for hearts and minds had been entirely lost. Leaving the defeated combatants to review and debrief (Canon 7) at their leisure.

Perez later mused, “Maybe we didn’t explain it well” (an understatement), ominously claiming that ESL remains on “stand-by”4. It would benefit from clearer focus on The Seven Rhetorical Canons in preparing its persuasive case, whenever the next chance arises.