In quibus confidimus: In whom we trust

It seems there is almost no category of person left that we can trust. Why? And what can we do to (re)build trust?

On the back of every American one dollar note and coin I have lies the motto “In God we Trust”. That probably doesn’t work for atheists. And I suspect it may not work either for those who can’t understand why God might work in oddly unhelpful, not just mysterious ways, when it comes to some form of personal disaster. I suspect though that it works for many people. For Americans, this motto was added to their notes and coins in April 1864,  as a constant reference point of moral virtue at a time of turbulence, the Civil War of 1861-5. Secretary Chase had instructed a motto be added “in the fewest and tersest words possible”. Today we’d call that an Aphorism.

For my title, I have changed one word in the motto from ‘God’ to ‘Whom’ as I want to download to you on a rather important aspect of persuasion, trust. 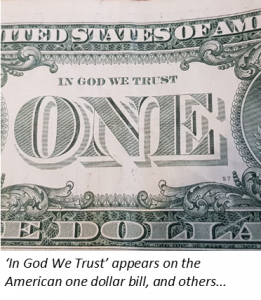 In God we Trust. Aside from Him, it seems that there is a diminishing list of professions and roles that by status alone suggest we can trust them. Yet Aristotle postulated that such elevated status was itself a big contributor to persuasion (as one part of his Ethos argument).

But long gone are the days when we looked up to Bank Managers as pillars of society. The BBC comedy show of the 1960s & 1970s, Dad’s Army, illustrated this by making Captain Mainwaring the butt of many jokes. The loss of status is also true many others: of politicians who we elect to lead us, accountants and lawyers, fund managers, a lot of journalists (in evidence I give you Martin Bashir and the BBC, m’lud), the Police, and religious leaders.

And then of course, somewhere down the list there are investment bankers, estate agents and second-hand car salesmen (they still are mostly male). Hence the common pub and shop sign ‘In God We Trust: All Others Pay Cash.

I realise that I am courting disaster here, as most of our clients work in the professions I have just included in the list and I was even an investment banker myself a long time ago, so I’ll try to dig myself out of that hole. I am not saying that everyone who works in these sectors is bad, and indeed I don’t think I have ever had a crook as a client, and even though I’ve been in this game for nearly 30 years now I have encountered barely enough of such dubious characters to start counting on one hand.

The problem is, to put it metaphorically, that one bad apple spoils the whole barrel, reputation-wise. This leads to the comment “You can’t trust anyone these days”, and we are all supposedly ‘on our guard’. We now get regular government warnings to help train us to spot fakes.

It seems that every sector and profession has had such bad apples: Anyone for Bernie Madoff, or Charles Ponzi and his little get-rich-quick scheme? Anyone not had a thousand scam phone calls or emails yet?

The damage done is almost impossible to undo. ‘These days’ we’re on our guard, but we’re also uniformed and naïve, so we rely on that great global professional police force, the Regulators, brought in to being because you just can’t trust people. But reliance on regulators has also caused us to lower our guard, falling back on their help when we get duped. It’s a big moral hazard.

As a result, I have been asking clients who you can trust ‘these days’. The consistent and sometimes sole response has been not the government, not the investors or bosses who’ve kept things going, not the researchers who created Covid-19 vaccines in record time, but the key workers on the front line in the UK’s NHS. As a sign of this, in the middle of 2020, much of our nation went outside for ten Thursday 8pms in a row from March to May 2020 and ‘clapped for the NHS’. And yet most of us have had little or no contact with those people. So, we can trust others we don’t know… up to a point. 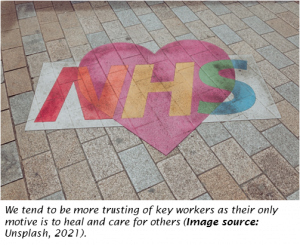 I’ve therefore pondered why we trust these key workers, and generally not others. I think one quick answer comes from motive. Not money, personal gain, ego, fame or career enhancement. No big house, sports cars or yachts, except for the very few who make it from Doctor to Consultant. No, their motive is simple: to heal and care for others. They have stood up to the enormous pressure of Covid, working in dangerous conditions for low wages, almost never complaining about their lot, even when it got ridiculous.

Some of you know that I trained as a medic. But despite mixing with a lot of witty, weird and wonderful colleagues, I was not well suited to spending time in buildings full of sick people (aka hospitals and local GP surgeries), so I left. I just didn’t have the vocation, but I deeply admire those who do. I don’t regret leaving, and – like many – have travelled through several careers, in my case teaching and investment banking, before finding a job that I really enjoy, and have become almost competent at. Simon Sinek (the author of ‘Start with Why’) would surely be pleased with that end result.

I think that may be why my clients trust my colleagues and me, and why we each trust them in return. It’s not about personal gain, it’s about having and fulfilling a purpose. Aristotle nailed it when he wrote about the importance of purpose (Telos). If you do trust someone, it may again be because of their motive to help, or perhaps a sense that they care about you.

Add to that an attitude for openness and honesty (sometimes admitting fallibility), integrity, a long-term business relationship, likeability, that the person makes sense, that they do a good job, charge reasonable rates and have kept promises, and you have the many main ingredients of Trust Pie. It’s a pie that is hard to make and which crumbles away easily.

Perhaps the motto should be “In God we Trust, because you can’t trust anyone else” or  “In Pie we Trust”. I’ll leave it to you to decide.