Snakes Alive! Who said that?

Des looks at the power (and pitfalls) of quotations

“Every great story seems to begin with a snake”. We’ll see about that. But using quotations wisely really CAN make us all more persuasive. As a movie fan, I wish I had confidence in the claim above being both factual and made by Nicolas Cage. I can’t though, so I won’t. Others should adopt the same approach more often.

That phrase is routinely, unquestioningly attributed to Cage. Yet those who claim they have tried to identify a definitive source for this “quote” (and I’ve had a go myself!) admit they can’t. Many lazily repeat it, all the same. Regardless of the source, it surely wasn’t meant literally, but instead hyperbolically: “EVERY great story…”? That would make for an unlikely Venn diagram, see below. 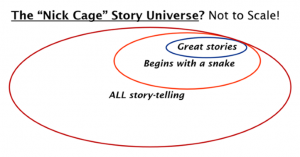 Quotation misattributions and errors are common, making their use problematic. Writer Ralph Keyes saw a nice niche for himself, addressing such issues. Quote investigation websites have become commonplace too, since. Keyes explains how “drift” and false attribution arise. For example: ‘“No plan survives contact with the enemy”… usually attributed to Eisenhower. Or did Napoleon say it? Patton perhaps? No one seemed sure. The observation actually originated with Von Moltke in the mid-19th century… “No operation extends with certainty beyond the first encounter with the main body of the enemy.” In a process that’s routine in the world of quotation, the Prussian field marshal’s actual words were condensed… over time, then placed in more familiar mouths.’1

At GPB, we value the persuasive power of well-chosen, accurate quotations from authoritative sources. For instance, we frequently quote boxer Mike Tyson’s pithy, modern variation on Von Moltke: “Everybody has plans – until they get hit for the first time” – often more colourfully (mis)quoted, “… until they get punched in the mouth.”2

Well-judged quotations are powerful and persuasive. They can endorse your key messages, making written or spoken content more impactful and memorable (‘sticky’). Used wisely, they can add credibility and gravitas. Both examples above were literal. Tyson was answering a pre-fight interview question, Moltke was writing a military handbook. Yet the metaphorical value of each reaches far beyond battlefields or boxing, into many areas: work, leisure — almost anywhere.

Using quotes lazily can prove counter-productive. As Joseph Roux, the 19th century poet and philologist noted: “A fine quotation is a diamond on the finger of a… wit, and a pebble in the hand of a fool”3. That may sound harsh but, even as I thought about this article, a dubious LinkedIn quote attribution made me skip the rest of the post. Socrates was apparently echoing the writer’s own advice in language straight from the LinkedIn playbook. It seemed all too convenient and shared no sources – a common problem AND a clue for the reader. Be suspicious!

I soon found websites featuring this Socrates ‘quote’. Yet none gave sources. Content is easy to copy from such sites but hard to verify. So few people even try, which speaks volumes about them. Need an authority for your pet idea? Just mention Socrates. Or Einstein. Or Sharp (see below). Only today I saw a LinkedIn post berating people for misattributing false views to marketing guru Byron Sharp. It used a dismissive and rude ‘RTFM’4. That reveals the strength of feeling such errors can generate — and earned a ‘like’ from Mr. Sharp himself.

Although researching the provenance of quotations may seem tiresome, it’s NOT trivial. We should pursue it with rigour. If a quote’s worth sharing at all, surely it’s worth the effort of ensuring you’ve got it right. Don’t be like Jerry, a used-car dealer from Rockaway, quoted by journalist Craig Taylor. Jerry doesn’t even pretend he’s checked his sources. He just sees the need for a voice more convincing than his own: ‘Aristotle, or one of the f**king philosophers, said it’s better to be good than bad. I mean, I don’t really know what that means, but it sounded good.’5 This may not be intended to convince but rather to make us laugh… 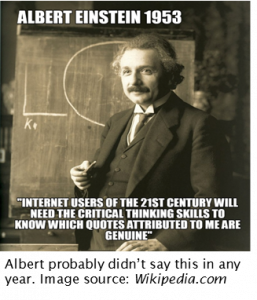 vidence, probably you’ll double-check its accuracy first, as you won’t want to be exposed by errors. Yet unverified words are often put in the mouths of exalted speakers. Keyes slyly observes that ‘Famous dead people make excellent commentators on current events’6. They have no right of reply. Although the living also sometimes get co-opted too, for example: Oprah Winfrey, Warren Buffet, Pele, Sheryl Sandberg, Barack Obama. That’s fine, as long as you’re SURE about your accuracy.

Inspirational quote websites can be handy sources for a meme – but they’re also minefields. So don’t get your typing fingers ‘burned’. It’s all too easy to cut and paste (or even to invent!) pithy phrases attributed to ‘famous dead people’, cherry-picked specifically to support pet theories.

That’s an approach you adopt at your peril. You need to be strict and conscientious about checking the provenance and accuracy of any quotes you use. Why’s that important? Because once you’ve unleashed a ‘quote’ on an audience, its degree of truth, accuracy and legitimacy reflects directly on you, just as the validity of your data does.

Ideally, share your reliable source references, as I’ve done here (“Go ahead. Make my day”7— check them, punk!). Also, your audience may know the quote, or may know it’s been mis-attributed, so will know when you get it wrong. At the very least, if anyone checks for themselves, your credibility (and the reliability of the rest of what you say) risks being questioned.

After all, if th 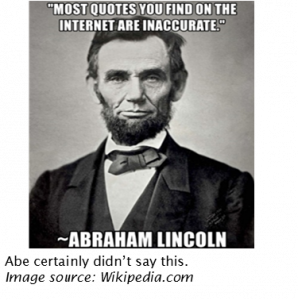 e roles were reversed, wouldn’t you feel misled? Even one missing or wrong word, a typo or punctuation error, can change your quotation’s meaning completely.

It should not surprise you that any whiff of error or misrepresentation damages trust. For example, Belloc’s lying Matilda8 and Aesop’s Boy Who Cried Wolf fatally undermine all trust in them. That’s an outcome few wish for. Politicians should take note. False provenance, errors and lies negatively impact our credibility (or Ethos, one of three “Appeals” with equal importance identified by Aristotle). See left side of our triangle, on the next page.

Verification is a hassle, but accuracy is a must for persuasion. It builds your ethos appeal, reducing fears about deception. It builds an audience’s belief and their trust in your abilities. It’s a key for unlocking your persuasive capability, helping others to take a ‘Leap of Faith’ in backing your ideas.

Ethos is undermined so easily, it pays to focus on all factors that can weaken it. So, accurately attribute and copy any quotations, or else just omit them. 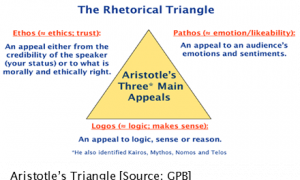 to those snakes from earlier. The Bible is just one example text that supports the claim of our Nick Cage ‘quote’. A ‘great story’ from early in its first Book (Genesis) famously involves a man, a woman, a forbidden fruit, and a serpent (“more subtle than any beast of the field which the Lord God had made”9). Snakes have enjoyed a mixed reputation ever since. Although it’s not true that even great Bible stories ALL “begin with a snake”, it might surprise you just how often they are to be found elsewhere, now you’ve been primed to spot them.

The popularity of snake references may reflect their perceived rhetorical impact. I’ll share a few more here I’ve noticed lately. For example, Nietzsche claimed: “The snake which cannot shed its skin, must die. As well the minds which are prevented from changing their opinions”11. That’s both a quote AND simultaneously a striking metaphor for the often polarised and entrenched opinions of our times. And  there’s the Snakes & Ladders game…

Here’s a favourite old quote of mine, a critical wine review AND a great snake reference. “Sticky” enough to influence my wine buying for almost 20 years: “get rid of lingering neighbours… a spectacularly awful Palomino from the south of Spain, would clear a room faster than a cobra… why most Palomino is turned into sherry.”12

A recent Europa League football final preview claimed that the Eintracht Frankfurt team “strike out like adders when there’s space”13. It’s a quotation AND a simile. Unfortunately for Rangers FC, who lost on penalties, it was all too prescient an observation, kicking off a great new story — with a snake!

GPB list the useful Rhetorical Tools, including quotes, on our website, at: https://www.gpb.eu/2021/08/rhetorical-tools-list.html. Try to use these well  to better engage, entertain and persuade an audience.

We end with a last quote from our web page, defining quotations as: “evidence using actual words spoken by someone else, usually famous, in authority… to assist with the clarity or persuasiveness of an argument”.

That’s a neat summary, despite its absence of snakes. But do notice a key phrase: ‘using actual words spoken’. Not just any old words that might suit our narrative goals.