There are 4 modes of communication, they're not used all that well

I was inspired to write about this because of a conversation with a client. They were complaining about the number of times they would be talking, and someone else in the meeting would start talking over them. I don’t suppose that’s ever happened to any of you! The client asked me what I might do to help.

Actually it’s not that easy to stop this happening. There is a habitual element, a corporate culture element, and maybe what they were saying was not that interesting, went on for too long or went off the topic. Or the time allocated to the meeting was running out and the other person felt obliged to ‘talk over’.

Before we go further, we need to summarise the Four Modes that exist in Spoken Communications (see below) to understand more of what was going on here. Really there should only be the first three modes, but people will be people…

Mode 1: Listening – using the ears and eyes, but not the mouth. Also in ‘Active Listening’ this is likely to involve the head’s ‘noddies’ and ‘shakies’, the face in smiles and frowns, along with the occasional ‘uh huh’ from the back of the throat. The Japanese culture often reinforces active (but seemingly passive) listening with eye closure (or maybe are they just off the plane and tired?).

Mode 2: Thinking – quite a good thing to do from time to time, an under-used asset at work, best done with all other brain and sensory functions minimised. We humans often try to think whilst doing one or more of the other modes, which, aside from thinking a bit whilst speaking, is a little like having two big computer programmes running on an old PC; they both slow down or even crash the thing.

Mode 3: Speaking – Ah, we mostly think we’re pretty good at this one, although the quality of output is sometimes dubious, either in what is said, how it is said or how long it takes to say it all. Those are topics for other SpeakUp articles gone before and yet to emerge from the keyboards.

Mode 4: ‘Waiting to speak’ mode. This is our name for what my client was asking about. It’s when, instead of listening or thinking, someone who was doing those things switches into ‘get ready to speak if there’s any chance’ mode, and signals with increasing displays and/or sounds that they want to speak urgently, with some grunts or words, gestures, or a combination, often in crescendo.

It’s very common in media interviews where competition for the microphone between interviewer and interviewee is rife, and not entirely unwarranted. It suggests impatience (a particularly Western thing), annoyance that the other speaker has not stopped yet, and possibly disregard or disinterest for what the other person is talking about.

The cultural or habitual aspects can be driven by the sense that to earn your pay or merit being at the meeting, you have to speak. I think you all know what I’m talking about!

So what is the solution?

Perhaps it’s a cheeky point, but I’d go here first: being rivetingly interesting to listen to. That should ensure no-one interrupts. Preparing in advance is good for this, but it’s more than that. What you say has to be worthy of the high attention levels you would like. Telling stories (true ones) well, instead of reciting a series of facts, helps a lot here. Being vocally ‘fluent’ too. Oddly, being provocative can also mean less interruption, as your ‘opponent’ will usually want to hear the full argument before trying to destroy it.

Second, learn to be more concise – to make a point with no waffle – then stop.

Third, avoid over-elaboration with excessive detail: if you are asked the time, don’t tell them how to build a watch!  To get these right, we often work on what we call ‘brain training’ which is really helping someone to use the brief pauses between phrases to think better about what they are about to say. 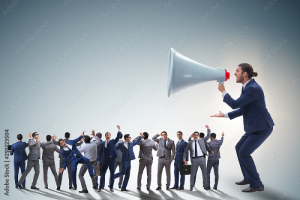 Fourth is a culture shift to one that is more respectful of others. One of our Consulting sector clients started on this in 2018 as part of their Diversity & Inclusion efforts. I was expecting it to take some time, but by leading from the CEO outwards, the effect was immediate and powerful. Suddenly I could hear moments, even pauses, when no-one was speaking. Mode 4 disappeared. Meetings didn’t take or feel longer, because instead of argument there was thought and then reasoned discussion; no-one felt that to ‘contribute’ they had to say as much as possible and, instead of that, listening and learning became the norm. Wow.    If you can also achieve that in your organisation, great things could happen.

Finally you can just reject the attempt to take the microphone and cling on to it by continuing to speak until you have concluded your point. This will mean at least two people are talking (I have observed as many as 6 people talking at once!), and everyone else is going to struggle to hear the speakers with any effectiveness. Again this is common in media interviews.

For me, continuing to speak has be on merit, or where the interrupting person (usually this is a journalist) is hounding you and has not given you any time to make your point. In these situations the audience support will tend to swing towards you.