We know that a successful presentation can be measured under two headings. First, did the audience understand and remember the key points of a message? Second, were they convinced by the personality of the speaker?

Putting this another way, was the act of persuasion successful because of the very well-argued message, or a convincing performance by the speaker? Or of course a combination of the two. Two American Professors have added a more scientific view of message and personality. Back in the 1970s Professors Petty and Cacioppo (P&C) developed The Elaboration Likelihood Model (ELM) of persuasion. This proposes two major routes to persuasion: the Central Route and the Peripheral Route.

P&C say of this route: ‘Under the Central Route, persuasion will likely result from a person’s careful and thoughtful consideration of the true merits of the information presented in support of an advocacy.’ I’ll put it more simply: A clear and well argued message is more persuasive. An example might be Alastair Darling’s largely unemotive but logical arguments for why Scotland should stay in the Union.

But P&C have more to say: They argue that for the Central Route to succeed there are two important hurdles to jump: First the listener has to be motivated to listen to what is being said, to process information that might be complex. Second the listener has to have the ability from their existing knowledge to understand what is being said. P&C go on to say that if the Central Route is successful, then the effects will be more firmly lodged for a longer period than the Peripheral Route. They also found that a lack of ability to understand or a lack of motivation means that the listener will make a judgment based on peripheral factors such as the attractiveness of the speaker.

Ability to understand: This is easy enough to analyse under the Central Path, by ticking off what should be happening in the inner circle: 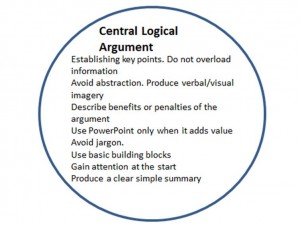 Motivation to listen: If the listener is hearing a presentation that is not relevant to them then motivation to listen may take a hit. It may be that the subject is something they dislike, so again motivation may not be there. It’s here that the skill of explaining the message in an interesting and appealing way can really make a difference. I can identify presentations that I was motivated to listen to, but the Central Route failed because the content was too hard to understand.

Here, P&C say that “persuasion results from a person’s association with positive or negative cues in the stimulus, or from making a simple inference about the merits of the advocated position. The cues received by the individual under the Peripheral Route are generally unrelated to the logical quality of the stimulus. These cues will involve factors such as the credibility or attractiveness of the sources of the message, or the production quality of the message.”

More simply put, the listener may be persuaded by a personality delivering in an attractive way; if the Central Route is not available, you do have a second chance to persuade by scoring well via the Peripheral Route. Here it is your personality that will become the key factor. This includes how the persuader uses their voice, or their body language and so transmits a level of conviction and passion that persuades. Gordon Brown scored highly in that area just before September’s Scottish Independence referendum vote. Some argue that his passion had a significant effect on shifting the opinions of the undecided towards support for the Union.

We can divide this route between vocal and visual (non-verbal) communication. Let’s look at each in turn:

Characteristics of a persuasive voice:

Have it both ways

If you can, you would want to be good at both routes.

There was a subject recently about which I had little interest which came alive when it was explained by a gifted speaker.  This speaker is Paddy Hirsch. 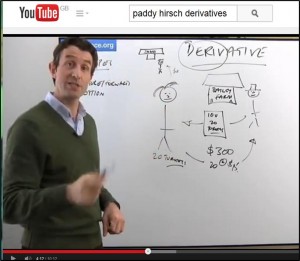 Type his name into YouTube and you will see him explaining all kinds of financial matters with great clarity and simplicity. His success is also achieved by peripheral brilliance.

He has an engaging chatty style and delivers with unbounded enthusiasm and energy. I believe that Paddy’s success lies in his combined excellence in both routes. He explains a complex subject such as derivatives and hedge funds with great clarity.

His videos start with a simple model which should be understood by a ten year old.

At this stage he’s possibly too slow, but quite quickly he adds layers to the information, and we can follow it because he progresses carefully from the foundation he started with. his is a simple and superficial explanation of Petty and Cacioppo’s ELM Theory.

If you have a challenge in presenting to an audience who are not motivated and find your subject hard to understand – their judgment will be significantly more based on how they judge your performance. But if you have the gift of being able to structure your message with clarity then they will be more motivated to listen and the long term effects more substantial.