In 2007 I wrote an article on negotiation based on idea of the three Russian Dolls. But I now think there is a fourth one.

So, what has prompted this radical change of view?! Well, it’s down to a recent negotiation of my own, rather than any client work. A close relative of mine, in her nineties, energetic and delightful but suffering from the onset of dementia, needed help. I found myself in a tough negotiation, and even confrontation, with a wide range of organisations: Thames Water, BT, a bank, Royal Mail, the NHS, an art dealer, and finally her IFA – who ended up in prison when found guilty of theft.

I learnt that winning these negotiations required persistence over several years. I will return to this point later.

The fourth doll; her name is Persistence: 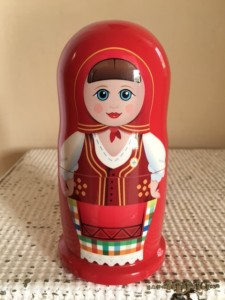 First though a recap on the other 3 Dolls: We can identify some common threads in all negotiations, for example the need to plan what we want to get, and coping with resistance from the other party if our wishes do not coincide with theirs.

To describe these threads more graphically, we decided some time ago to use the metaphor of the Russian dolls. Who are they? They are of course a nest of dolls placed one inside another, and in Russia are called Matryoshka Dolls (something to do with ‘little matron’).

The Outer Doll: THE RELATOR

The Outer Doll is all about Relationship

and Communication Skills. This is about building trust, respect, finding out information and listening carefully. Note that gaining trust is not the same as being liked. Being courteous and pleasant would be preferable to being abrasive and assertive in certain synergistic settings, but any negotiation is still better played with a degree of reserve and caution whilst (where possible) being open.

It is helpful to find out the wishes and needs of the other party – who may also be reserved and cautious. And so it’s important to be skilled in winkling out your counterparty’s objectives whilst not disclosing too early your own innermost thoughts. This can lead to a kind of ‘stale mate’ though, as both sides entrench their positions. You need to know what you can be upfront about, and what you wish to hold back on what might be a tradeable concession.

The Middle Doll: THE PROCESSOR

The middle doll is about process. You will need to be clear with yourself what you would want to get out of the negotiation.

Here are some good questions to ask yourselves: What is your starting position? At what stage do you walk away? What do you know about or consider are the objectives of the other party? Are there areas of concession where you can trade something of low cost to yourselves that are seen as of great value by the other party?

Sound preparation of the Middle Doll can make all the difference between success and failure. The Harvard Business School has some excellent checklists* which are free to download to help you with this.

The Inner Doll: THE PYSCHOLOGIST

The Inner Doll is all about tactics and psychology. This is the area where a tough negotiator will weaken the other person’s position through a number of techniques. A weak negotiator will reveal his hand too soon, concede too readily and lose his nerve. There are plenty of manipulative techniques.

For example a sharp intake of breath as the other party makes what you see as a controversial point. It’s often called ‘the flinch’, and is usually a visual and/or vocal reaction.

Another tactic is in response to a demand for a concession. You may feel able to make such a concession, but make it small and ensure you get something in return, a tradable concession rather than a unilateral one.

The Fourth Doll: THE PERSISTER

My negotiations on behalf of my elderly relative were protracted, starting back in 2009. Some items were sorted quickly but others dragged on, like one of those hills you climb: when you think you are near the top you realise that you are just facing a false crest! I also re-confirmed that all of the first three Dolls were essential; for example   I worked hard at building good relationships with others.

One funny one was with the postman, who was delivering scam mail by the bucket load which he was under a legal obligation to deliver. Negotiation failed at first and then success came when he agreed to let the Hall Porter of her block of flats act as a filter. So an oblique approach worked. But the biggest test of persistence came with the Crown Prosecution Service, the CPS. The accused IFA, found guilty of theft, served a custodial service. My role, with power of attorney, was to negotiate the return of the stolen money.

The CPS closed the door on a claim for compensation, despite the defendant owning a house in London. A forced sale would have released sufficient money to pay back what he had stolen.

For months we were rebuffed by the defendant through a series of Magistrate and Crown Court hearings. But then we got lucky: a friend, a recently retired judge, taught us how to negotiate in these settings. Well-crafted letters were sent to the presiding Judge which attracted favourable attention, but still the CPS refused to budge, so we decided to write to the head of the CPS.

We judged a letter of complaint would soon be sent into the complaints procedure and disappear for many weeks. So, instead, using a bit of Edward De Bono’s Lateral Thinking, we sent a letter suggesting that the CPS case officer might benefit from advice and guidance. Within days they agreed to review the case. Victory was ultimately achieved. So the lessons learnt were:

I would argue that co-ordinating these four distinct skills is as important as the individual skills themselves. For example in ‘Outer Doll’ mode we try hard to establish good relationships. Yet when it comes to tactics (Inner Doll), we have to cooperate in an area of confrontation. If we are still plugged into the Outer Doll mindset then we may concede too readily in the heat of the moment.

Persistence is at the core, so becomes the innermost Doll, and may well be the most important one of all.