Develop and Combine the power of your persuasive ‘muscles’ - in the right order.

As Ewan’s article suggests in this same edition of the Journal (see reference 8 below), becoming the most persuasive communicators we can be is a multi-faceted process. When trying to achieve change in the actions or thoughts of others we must flex several different persuasion ‘muscles’ at the same time if we hope to optimise our effectiveness and success rate. But it’s also important to be aware there’s an optimal order in which to flex them.

Anybody who has unexpectedly spent time at home recently may well have found themselves on the receiving end of some very unpersuasive “cold” approaches from people trying to sell them something. Whether via phone, email, LinkedIn or some other medium — and whether they needed that something or not. Since such approaches forgo some basic principles of Effective Persuasion, most of us (not unreasonably) remain resistant to them.

Worse still has been the ‘surge’ in financial and other scams during coronavirus lockdown. Research published in August 2020 by Barclays Bank showed a 66 per cent increase in reported scams in the first six months of last year1. While Which? claims that, of the £355.3m lost to UK bank transfer scams in the first half of 2021 (a +71% YoY increase) ‘just £121.7m was reimbursed to victims – only 42.4% of the overall losses. Not only is more money being lost, but less money is being repaid to fraud victims’2. Such stats might well negatively impact our perception and reception of all cold contact, making us more suspicious.

But what makes even non-scam “cold” calls feel so… errrm, cold? And what can we learn from them which might help us develop more successful and persuasive approaches to our communication more generally?

One reason why so much cold contact is unpersuasive is that insufficient time is invested in developing Rapport and Understanding. Cold-callers instead play a numbers game and often use the scare tactics too. Approaching a large quantity of unqualified leads, they hope that at least a small proportion (perhaps just one?!) might miraculously convert or progress. They’re prepared to waste a lot of our time – and theirs.

Without gaining enough relevant, valuable information and developing rapport, cold calls tend to start in what can be called the Push phase, by prematurely presenting or proposing their product or service. Often there is a self-fulfilling question at the end. And while some Push is an important element of the persuasive process (c. 30% of it) it’s rarely successful if an audience has not been made receptive already, or warmed up. 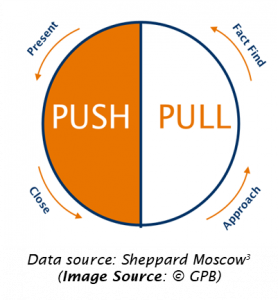 It’s always worth remembering that people do things for their own reasons, not for ours. So we should try to identify those reasons, incorporating and highlighting them in our discourse.

This audience-centric model for Effective Persuasion applies well to sales and business development. Because getting influencing wrong results in an expensive waste of resources: time, energy, money, and valuable opportunities. But it’s also relevant to other scenarios that involve “selling” an idea, presenting, or persuading.

One of the most popular articles in our Speak Up Journal archive explores how this Pull-Push approach can usefully inform important communication and influencing done by business leaders.

Using the Push technique first is rarely successful in the longer-term, so it’s positioned in the second half of the diagram above. Starting from the bottom of the circle (at “6 o’clock”), moving anti-clockwise, we advise that you use a Pull approach first.

Observations also showed that commitment to (or compliance with) Push demands tended not to last long, once pressure is removed. Developing some inner conviction, a typical result of Pull strategy, is far more effective. What people tend to do most instinctively (i.e. Push) produces very sub-optimal results.

Cold calling might sometimes achieve a sale, but it will rarely lead to a long-term client relationship. Whilst failure (the more common result) can drain a sales person’s confidence, sap morale, and create uncertainty – and rapidly permeate an entire organisation.

It is widely reported that staff turnover in the call centre industry is around 26% annually, considerably above the national average of 15%,  impacting training costs, recruitment fees, loss in output and the concern that other staff may follow suit ’.4 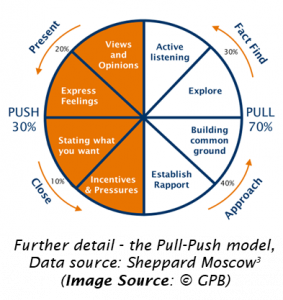 A ‘Pull’ technique starts with the “Approach” phase. This has 2 sub-elements, as you see in the diagram. The key is to engage the other party by being genuinely curious about their opinions, needs, goals, preferences and behaviours.

As this more detailed version of the model shows, we suggest that Pull efforts should take up the majority of effort and time when selling (c.70%).

As they allow the counter-party to do most of the talking, “Pull” techniques give sales people less control of situations. It can also seem less efficient than simply Presenting and trying to Close. But by Pulling first, you establish a valuable dialogue, generally providing useful and important information – as well as longer-lasting engagement. It reaps benefits for both parties, covering the vital Ethos (trust) aspect, which develops credibility.

The Fact Finding phases involves active, deep listening, along with skillful questioning, using probing and prompting skills. These should build naturally and progressively, optimising the information gathering and further developing the relationship. The table below has further details:

Some typical Pull and Push behaviours

With many businesses specifically set up to manage cold calling, either for themselves or as a service for clients, the post-Lockdown (post-Furlough) return to work may well again prompt increased levels of such contact.
If your aim is to persuade, however, you’ll probably want to know that your own organisation’s key messages are going to cut through a lot of this potential background noise, and instead be as relevant, compelling and memorable as possible for your audience of potential clients. And that’s something best done using Pull techniques first. This is true whether pitching for business or when communicating in other settings.

The Pull phases help to refine your key messages, as with a relationship successfully built, and valuable information gained, you can then more confidently present tailored ideas. Audiences will listen more readily and receptively to your messages, rather than resisting.

In his Dr. Doolittle stories, children’s author Hugh Lofting describes the Pushmi-Pullyu. A fabulous, two-headed creature perfectly adapted to thrive in its natural habitat. Despite appearing to possess two competing halves, it’s made clear that these apparently opposing parts are in fact entirely complementary and symbiotic.

The Pull and Push elements of GPB’s Persuasion model are similarly complementary parts. The main tweak we suggest is that you Pull first before Pushing, weighting more of your effort and time on the former. A Pullme-Pushme, perhaps?

Adopting the best order of their use is all-important. We advise that you start with Approach and Fact-Find phases. And only then Present a relevant case and move to the Close. That should save you a lot of audience resistance and wasted effort. Cold Callers would learn a lot from reading this article.

The Pushmi-Pullyu claimed that its great-grandfather had been the very last unicorn. Selling organisations and their sales teams can reduce their own existential risks (and wasted effort) by deploying more persuasive approaches to communication. Let’s, ahem, push for that.